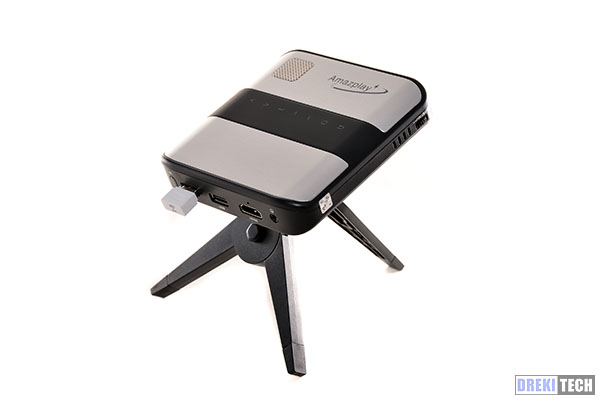 Summary:  While it’s a little bit expensive for the features, this projector combines good picture quality with a nice build and excellent battery life, making it a good choice for those who want a projector that can be charged by USB. Just note that it will not run off of USB power unless the power bank is capable of supplying 2.4A. Were the AmazPlay priced at $229 it would be easier to recommend, but as it stands there is the AAXA ST-200 at the same price, which has less battery life but is native 720p (and resolution is one of the more important aspects of these projectors). For only a few dollars more the AAXA P5 has identical battery life, is brighter and has 720p too, but is bigger. Taking into consideration the size and battery life of this projector, it’s a good option compared to many of the other 480p projectors available at this price point.

Hey there, Dreki here and today I’m reviewing this Amazplay pico projector. It’s a small thing, a little bigger than two cell phones placed side by side, with a lens up front and some touch sensitive buttons on the top. I like this projector because it is charged over USB, so I can take it anywhere without worrying about bringing extra cables. The image quality is pretty good and the build feels solid. The projector itself is metal on the top and plastic on the underside. It feels well made, much higher quality than the all plastic pico projectors available on the market.

Image quality: Image quality is surprisingly good for such a small projector. Sure, it is low resolution, but I found that I could read most on screen text if I set the scaling right in windows. It takes a little time to focus properly, but once I managed to focus it the frame was sharp. Colors are accurate and feel natural. Motion is smooth. Contrast is pretty good too. It is far better than I expected for a portable projector and even better than other cheap full size projectors I have tested.

Brightness: I was expecting 100 lumens of brightness to only be visible in a pitch dark room, but I was wrong. This projector is capable of being viewed a little bit of ambient light, for example if I had my hallway light on while watching it looked fine. Of course, viewing it in a pitch dark room is best, and there colors pop and whites feel bright enough. This projector is best for animated films, but I had no issue watching darker content too.

Audio quality: The speaker built into this projector is OK, but not great. The quality of the projector’s speakers is like a cell phone: tinny and lacking bass. I could use it in a pinch, but I recommend buying a small external speaker. There is a audio out port on this projector so any line-in speaker will do.

Fan noise: one of the best things about this projector is it is silent while running. I can barely hear the fan as it runs. The fan faces downwards, so it is important to not place the projector on a carpet or blanket otherwise it will overheat.

Battery life: Battery life is good on this projector. From my experience it lasted just under two hours. That is enough for watching several 20 minute TV episodes or a shorter movie. There is no indication when the battery is going to die other than a battery meter that is only visible on the start screen. Thankfully the projector can run off of AC power, assuming you have access to a power bank that can put out 2.4A. When it is projecting off of USB it will not turn on unless it gets enough power.

Wi-Fi/Connectivity: The EZcast Pro wi-fi works great with my phone. I used it to watch videos and the lag was minimal. I stuck to HDMI with my PC and had no issues.

Other notes: There is one oddity about this projector – the projector occasionally takes two tries to start. I believe this is because it does not receive enough power on boot if the power button is held down too long. I noticed this behavior mirrored in particular when I had the projector plugged into a 1 amp AC power source. The projector tries to run off of AC power instead of its internal battery but it cannot do so because it is not receiving enough power. A quick restart always solves the problem.
Conclusion: I’m happy with the performance of this projector. The picture is clear and the fan noise is minimal. All inputs work great and the user interface is easy to use. It does have its little quirks that keep it from being perfect, but if the price comes down $199 it would be a decent deal.