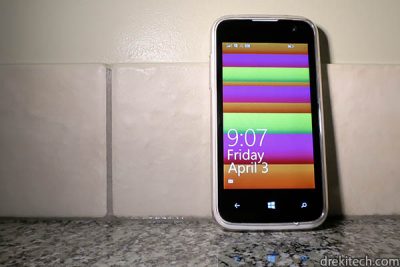 The Blu Win JR is best for only the most basic of phone users. While it is extremely inexpensive, its terrible camera quality and underwhelming design will leave users quickly asking for more. With a retail low of $70, it could make a great burner smartphone but it doesn’t work for much more than calling and minimal messaging.

The Blu Win Jr is just your standard small smartphone. It’s a little chubby and it looks pretty cheap. It is made from a soft feeling plastic which is pleasant to the touch. The device itself snaps together into a firm package. However, the included TPU case is so tight on the phone that it’s near impossible to remove without also pulling off the back of the phone. Also, the TPU case tends to get yellow over time so if you’re going to use it I suggest getting a colored phone so you won’t notice the discoloration.

I was surprised at how good the screen on this phone actually looks considering its price point. The colors are vivid and the viewing angles are adequate but not up to par with recent technology. I didn’t notice the lower resolution as much as I thought I would – perhaps because it’s such a small phone. That being said, I felt at times on screen graphics and text weren’t as sharp as they could be.

Also I noticed that the screen doesn’t seem to be responsive to fast touches. This is mainly a problem while texting as occasionally it misses a letter, however it is quite a frustrating issue.

For most uses this phone performs fine. If you’re going to use your phone for just texting, WhatsApp and calling you will have no issues. In fact, it responds quite well for basic tasks. But it does bog down when running multiple social media applications in parallel with music and/or maps.

Only part of the 4gb onboard storage is available to the user. Buy a MicroSD card if you want to do much with this phone!

The camera on this phone is awful. It consistently misses auto-focus in anything but the brightest light and the images are noisy and disappointing. Video suffers similarly. The front facing camera is reminiscent of 2005.

The battery is probably the best feature of this smartphone. With normal usage it lasts nearly two days. With high usage it lasts just over a day. The phone is currently being used by my parents who use it for occasional texting, and they only charge it every 3 – 4 days.

I found the audio quality through the headphone port is missing something. It’s a hard quality to describe but it sounds a little bit tinny and lacks oomph. That being said, it is acceptable for casual use. I’d rather buy a phone like this than invest in an overpriced MP3 player.

Windows Phone OS does great things with low end hardware. That being said, I feel like spending just a little more money will buy you so much more of a phone. The real deal breaker for me is the awful camera performance. Even brand new smartphone users will be craving more.