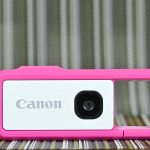 The Ivy Rec is a bit of an odd duck in Canon’s camera lineup: more like the Fuji Instax has somehow mated with a Go Pro rather than anything else Canon makes. That makes sense seeing as this camera is meant to be paired with the Ivy Instant Printer, making it some sorta weird digital print hybrid. However, the Ivy Rec itself, from a camera perspective, is kind of a wreck. It isn’t a good enough digital camera to buy just to own a digital camera, and furthermore the Ivy printer can easily be used with a smartphone. And since any smartphone has autofocus, their image quality will be better than the Ivy. So what is the point?

Build quality on the camera borders between being “great” and “toy-like”. It’s made of plastic with a rubberized finish and the single button has a nice feel to it. The clip is solid and gives the entire thing a decently balanced weight. The battery door is hinged and clicks closed with a reassuring sound. However that battery door is the main point of concern: there is a rubber ring around it to make it water resistant but in order to charge the camera or do take out the SD card that battery door needs to be opened. And the battery life on the camera is relatively mediocre, so the camera will need to be charged after each day it is used. Most concerning is that the battery door is only held down by one little tiny plastic edge that will see significant wear and tear with use.

The camera itself is super easy to use. Flick it to video or photo mode and press the top button. Start up is quick so there’s very little delay to begin shooting. It has a beep to start and stop recording that cannot be turned off, and the typical fake camera shutter sound that cheap action cams use.

When you’re filming with the Ivy Rec your options are pretty limited: you’ve got 3 video resolutions, 1080p60, 1080p 30 (the cameras default resolution) and 720p 30. When the camera is in wireless live view mode it is limited to 720p 30 which doesn’t make sense since videos are only saved to the camera and not onto the smartphone. So why can’t it save in the higher resolution? Who knows.

The app itself works fine for previewing video and setting the few things about the camera you can change however it is very limited. There is a good 2 seconds of lag in the live video, and some serious glitching in file playback especially with 1080p files. Any files will need to be downloaded manually to be watched, as nothing automatically transfers. Manual downloads work fine although leaving the app causes the camera to disconnect so it is impossible to multi task while things are downloading.

Video resolution is really not that bad as far as 1080p 60 cameras go, especially when put beside many budget action cams. Then again, the Ivy is the same internal hardware as a mid range budget action cam, just with Canon branding. With modest expectations of what a basic 1080p60 camera can do, the Ivy doesn’t really stand out as better than average in any way. Colour processing is good, albeit sometimes pushing a bit too yellow depending on what is in the frame. The videos have a good amount of detail (assuming what you are pointing at is in focus), though it is a little over sharpened as there are some sharpening artifacts around fine details. Exposure is mostly handled well, with colour only occasionally getting blown out. Over exposure was especially noticeable when the camera was pushed to reproduce some colourful flowers (which most cameras would struggle with). The camera seems to favor a brighter image at the expense of some highlights being blown out. The results are mostly pleasant looking photos and video though.

It appears there is even some image stabilization going on, although if this is the case it is fairly basic and similar to 3-4 year old mid range action cams like the ThiEYE T5e. This would make sense as that camera is also based on the Ambarella A12 processor. There is no setting to turn off Image Stabilization, but for the most part it helps instead of hinders, especially with handheld shots.

The biggest issue with the video quality is focus. Since the camera is a fixed focus lens with a focusing distance between 6 and 20 feet, anything outside of those parameters will be blurry. This is more noticeable in still photos versus videos as the stills are higher resolution, but the focus distance was such that holding the camera out to take a selfie resulted in soft images. If this camera had auto focus it would be far more capable.

All these observations are in well lit situations. On a sunny day, or even an overcast day, the video quality is pretty alright. But once it starts to get dark, results get poor. This camera wants a lot of light and when it gets dark the video is mushy and details become smeared away.

For best quality at night turn the camera to 1080p30. It does not use an Auto Low Light feature meaning that 60 FPS will be darker because it is double the shutter speed of 30 FPS. This camera is not afraid to push its night time ISO to the point where video starts looking like it was drawn with big blotchy markers. At least it is possible to see something.

Most photographers will know the saying: the best camera is whatever camera you have with you. And well, if all you had was the Ivy Rec that would be true. Almost everyone is going to have a smartphone with them though. And the Ivy Rec even wants to use that phone as a display! So it’s kinda pointless to carry when a phone camera will be significantly better in nearly every situation. Most mid to high end smartphones are water resistant, and shockproof with a cheap phone case. Maybe 5 years ago a camera like the Ivy Rec made sense, but this camera is too little too late. It’s like Canon figured, “hey, the Go Pro Hero 2 is a great camera, let’s make that!”

Not only do phones have auto focus, they also have screens so you can actually see what you’re taking a photo of. They also have advanced software processing that is basically magic. During the day, a Samsung S9, an over two year old smartphone, has better colour processing, better dynamic range, more detail and an auto focus lens which means everything is crystal clear regardless of distance.

For video, there is more detail, more resolutions, touch focus, manual settings, better stabilization, and well, this list could go on. Essentially the Ivy is $129 for an inferior camera in every single way that isn’t even really as useful as an action cam.

But maybe simplicity is the point of the Ivy. Get rid of all those distractions. Get rid of all the settings and options. It’s more akin to shooting film than shooting digital. Take a photo or video then come back and look at it at the end of the day. Well, if you really want that film experience, just shove a <1GB Micro SD card in it. Might as well limit yourself to the amount of photos a film camera can take too.

Speaking of still photos, that’s probably 90% the point of this camera, and only 10% of this review. The camera is suppose to pair with Canon’s Ivy Instant Printers. As such, the photos it takes are decent enough but still have all the same limitations as the video. Poor dynamic range compared to a phone and a fixed focus lens means extreme creativity is required to get a good shot (or just a lack of caring how things turn out). And over the course of reviewing this camera I took hundred images of all the flowering bushes around the neighborhood with both this Ivy and my phone and most of the time I preferred my phone by far. Frankly, though, autofocus is the main thing that the Ivy is lacking. For the most part in terms of colour reproduction they’re pretty good, it’s just that get too close or too far from anything and then the image will be blurry.

Recommended second hand on eBay, although Check out Amazon USA or Amazon Canada as some of them have gone on sale for very cheap lately.

This entire review talked about the faults of the Canon Ivy Rec, yet, I actually really like it. There’s some stupid fun in stepping back and not really caring how the image turns out. It’s a throw back to the days of film photography when I was a kid and I would take tons of photos on a poor quality crayon branded camera I got for free and then waiting to see how they turned out. The Ivy is similar to that camera in the sense is has a fixed focus lens, one setting and a single button (and that camera was free). Not having the gratification of seeing the photo right away or being able to share it right away was quite an enlightening experience. At the end of the day I found myself going through all the photos and videos and actually reminiscing on what happened versus ordinarily where I’d take a bunch of photos and never look at them again.

Is that worth $129? No way. I would not, ever, EVER advise going out to buy this camera at full price. But there are a bunch of people on eBay selling this camera for between $30 and $50. And I’ve gotten enough fun out of this thing to justify the $35 I paid.

Perhaps in a few weeks the novelty of it will wear off and the Canon Ivy Rec will find a place in my cupboard among other cameras that I never use. But until that point comes around, yeah, it’s gonna stay in my pocket to take random pics and videos when I just want to relax and go for a walk.