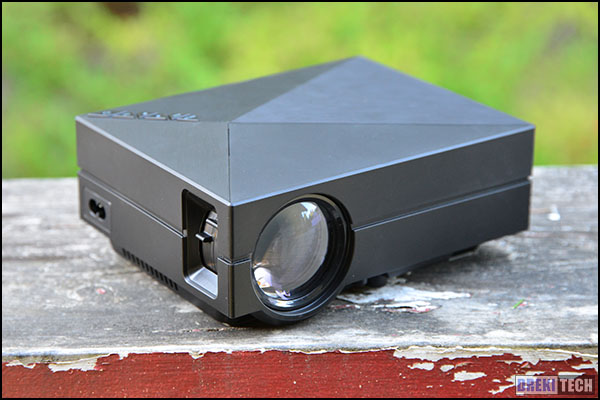 Conclusion:  This projector represents a lot of value for under a hundred dollars. Of course it won’t be as good as a true HD projector or something like the Epson HC2040, but for those who want a cheap projector for occasional use that has decent performance, this will be one of the better choices. The brightness is decent, the color balance is good and the fan is quiet enough.

Hey, Rob from DrekiTech here and today I’m reviewing the GM-60 projector. This is an unbranded device available from a number of suppliers. I found that for the money, this projector represents a lot of value as it has good color performance and looks great for movies. I just wish it was a little bit quieter.

Brightness and color performance are far superior to any other projector in this price range I’ve seen. Browsing the web is a bit difficult due to the low resolution, but games and videos look good – very good in fact. In ‘warm’ mode, the color profile matched my laptop screen closely. Contrast is about the same is my far more expensive Epson projector. For the money I don’t believe it’s possible to get better color. Brightness is fairly low – I would recommend using it in a dark room only. It’s about the same as viewing my laptop on 15% brightness – in a dark room everything looks very good, but bring in any ambient light and it quickly washes out. I found the projector did its best between 60-80 inches, but was watchable over 100. There’s no ability to adjust the throw distance by zoom, but there is a manual keystone correction.In terms of being able to read stuff on screen, well, it’s a low resolution projector. Items with bigger text are fine as the projector does quite a good job with scaling, but small text items, such as lists are not possible to read.

The built in speaker is not very good. It is muffled and tinny and as a result my laptop speakers sounded better. There are many cheap, excellent portable speakers on the market. Here’s what the projector sounds like: […] and here’s what my laptop sounds like […].

Fan noise from this projector is pretty audible. It’s not loud enough to be annoying, but I am always aware of it, especially in quieter moments of movies. Because the speakers built into the device are quiet, they don’t manage to drown out the fan noise. Here’s what it sounds like in relation to my voice.

This projector has plenty of inputs and the ability to play movies from various types of USB media. It’s easy to switch inputs.
Gaming lag: I have no way of measuring lag exactly, but it felt fine to use. I’d suggest to use this projector primarily with movies and TV.

Movies and TV look surprisingly great on this thing. If you want a home-theatre projector for small to mid size setups and don’t want to pay much, this is one of the better options on the market. It’s got good color, a sharp image and decent build.