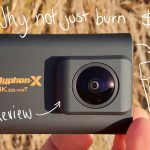 The HyphenX M80 is an Amazon Special, a generic action cam which is available as a number of different brand names. Other examples of this camera include the Crosstour 4K, ieGeek 4K, COOAU 4K Action Cam,
Dragon Touch Vision 4, Apexcam, WONGKUO, Supkiir, and LeadEdge LE7000 Sports Camera. Since all of these budget action cams share similar hardware, this review also applies to them. While some of these “brands” may have minor improvements over others or different included accessories, do not buy them. The results are universally disappointing and far worse than other cameras at this price point. The SooCoo C30 is only $39.99 and is a significantly better camera so long as audio quality is not the main concern.

When picking up this camera it is immediately obvious how cheap it is. There is hardly any weight to the camera, and it feels like it is made with a thin hollow plastic shell. The battery and memory card are covered by a plastic door that just falls off. It will be quickly lost

The screen has awful viewing angles, and is washed out in the sun, making it near impossible to see what is being filmed. It looks and feels more like a toy than a real action camera; more like one of those hollow plastic sample phones they put on the counter at stores so that the real thing does not get stolen.

The Hyphen-X M80 surprisingly comes with a very well rounded kit, including some useful accessories such as a hard case, two batteries, a dual battery charger and an external mic. If only the rest of the camera lived up to the accessory kit.

In the day and age where touchscreens are becoming universal on budget action cams, the Hyphen-X M80 sticks to an old school button interface. That is not an issue in itself, however the M80 has by far one of the most frustrating button interfaces on an action cam released in 2019. There is only a down button to navigate lists and settings. Because of this, there is no way to set the date without scrolling all the way through every possible year: it starts out at 2018, then skips to 2070, requiring over 50 button presses to finally reach 2019. This will be required every time the battery is switched, since the date resets itself.

Other options are not much better. Accidentally scrolling past the setting will require pressing the button a dozen times or more to get back to it again.

On a more positive note, at least the camera does have many customization options for sharpness, colour mode, ISO and white balance.

The 4K 30 on this camera is fake. The camera only produces 20 frames, with every 3rd frame doubled to reach 30. This results in jerky, rough looking video. Panning up and down causes one half of the image to lag behind the other and that makes the video look wobbly too. When the camera is held still and things are not moving, there is a good amount of detail, but what is the point of having an action camera if it can’t film movement?

With stabilization turned on, it makes matters worse. The video quality at 4K is best described as “Motion Sickness: the Movie”. The stabilization is ineffective, and to compensate for the extra stress on the processor, the camera drops itself down to 15 frames per second with every 2nd frame doubled.

Now, expecting such a cheap camera to do real 4K is a bit silly. So if this camera could do respectable 1080p 60 it could still be redeemed. However, this camera cannot even manage 1080p 60. Just like the 4K, every 2nd frame is doubled to make 60FPS, and that results in video looking just plain bad. There is only a true 30FPS. Colours are off and the amount of detail is low. It looks more like a camera phone from 2008 than a modern action cam.

The only usable format on this camera is 1080p 30, and that is a massive disappointment because of the dull colours and poor details.

The biggest draw to this camera is its included external mic. That feature is almost unheard of in a sub $50 camera. The external mic has excellent audio quality. Too bad the video quality sucks and makes the audio quality largely irrelevant.

Instead of this camera, if you want to spend under $50, buy the SooCoo C30. Audio quality from that cam is not great but if you are going to use it mostly in the waterproof case anyways, it does not matter…