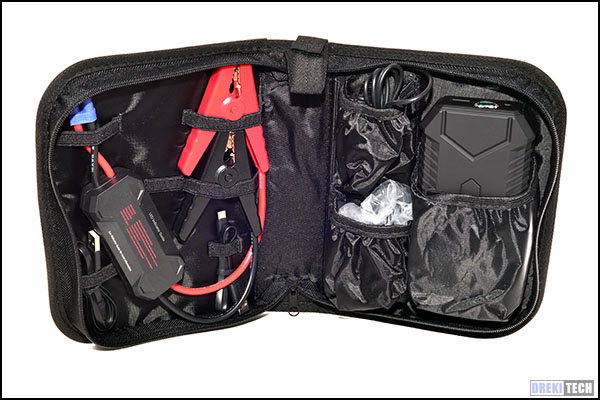 Summary:  In terms of build and performance, the RavPower jump starter does the job. It charges phones, shines a bright light and jump starts vehicles. Jump starters are useful things to have for the peace of mind and the RavPower is a good option. I just wish it came with a hard case.

The first thing I noticed about the RavPower jump starter is also its biggest disappointment: its carrying case is not hard. It is slightly rigid, but compared to my other jump starter kit that comes in a plastic hard case with a lot of foam padding I do not feel as comfortable just tossing this one in the trunk. The case isn’t badly made, by any means, but I would prefer a little more protection. The inside of the case is just some nylon straps to hold down all the components and while it looks awkward, everything here has its place. First impression aside, everything else about this jump starter seems positive: the shell of the battery itself is reinforced and rugged (though not waterproof). The raised rubber ridges give it some heft. I wouldn’t trust it for major falls, but with that grip it would be difficult to drop. All the other components seem to be of fine quality – nothing really stands out, but there’s nothing to complain about either.

The battery pack itself has a hefty 14,000 mAh – enough to charge a typical Android smartphone about three times. Charging works fast and recharging is by wall wart or lighter jack adapter. I particularly appreciate that there is an on/off switch so that the battery will not die as quickly from trickle discharging if left in the trunk for longer periods of time. It’s good when a bit of backup power is needed, but don’t take it for granted because if you use up all the USB power and then your car dies you’ll be stranded.

Yes, the RavPower does jump start a car without issue. It’s not a miracle device – and if your car is actually dead dead it won’t help, but in the instances where the battery has died from something silly like leaving the radio on, a jump starter like this will save a call to a tow truck. I’ve helped out a few people in the parking lot where I work and they always ask about the product after it starts their car. I have not tested this particular model with anything larger than a passenger car, but my other jump starter have worked with SUVs and even light trucks. This has similar specs so I assume it’ll work for them too.

I really appreciate that this battery has two USB ports. I always find myself needing to charge two devices at once so having the extra port is a great feature for ‘just in case’.

The box mentioned that the jump starter will not start a car if the battery level is below 60%, so checking the level is something that should be part of a periodic car maintenance routine.

Really, a jump starter is basically an insurance policy. It’s more for the peace of mind of always having a backup power source instead of daily use. I keep mine in the trunk where I can pull it out at a moments notice – for my little car, for a friend or even for someone at work. Compared to the competition, the RavPower is on par build quality and performance wise for its cost. So far everything has worked good. I hope it’ll keep working for the next time I need it.