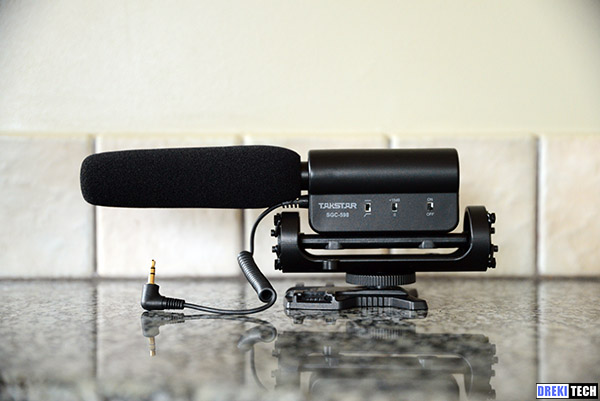 While taking into consideration that the Takstar is by no means a professional mic, the audio from it is alright, with a good amount of warmth and punch. However, don’t expect miracles from it- because it is quiet, the mic works best in close range. I would suggest using it for vlogging, close-up interviews or voice recording on a computer. And keep in mind you’ll likely have to spend time editing out background hiss.

I was immediately surprised at the appearance of this mic. It looks professional. It’s not too big nor too small. It could work well as an on camera mic or off camera (if you purchase a audio cable extension). My primary purpose for using this microphone will be in the videos I make, so you will get to see it in action soon. My initial impressions are quite good. I think this mic will work for my purposes. Whether or not it’ll work for you depends on your application. If you’re looking to record subtle nuances that happen 20 feet away, look elsewhere, but if you’re recording fairly close audio and interviews and you have a budget this may be one of your best choices.

It was quite obvious however that the shock mount is a bit stiff upon first filming as anything that bumped the camera tripod made noise.

This mic is a fairly neutral balance, with emphasis on the mid and lower tones. This makes for quite a pleasing amount of bass in male voices, but doesn’t wash out female voices. By all means, it isn’t in the same class as a professional mic, but at 1/3rd the cost of many professional mics it is more than acceptable.

There is some fuzz in the background but for the most part it is easily edited out in post. Also, you’ll notice that this microphone is not as directional as many interview mics should be. It’ll pick up street sounds and background audio, so it’s best used in a quiet area.

The only downside is that this mic is rather quiet. It is best used for closer up interviews and I wouldn’t suggest standing more than 10 feet away from the mic.

Here is a sample of the audio quality:

The best thing about this mic is its price: it is available to anyone on almost any budget and competes with many higher end microphones in terms of performance. That being said, it isn’t a professional mic but what your money buys you is a perfectly serviceable product that may in fact surprise you.