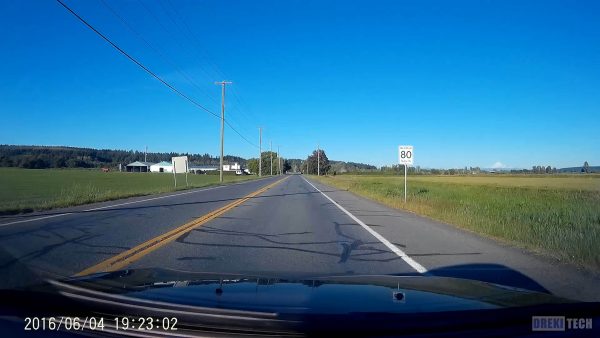 Conclusion:  The Vantrue N1 has good quality video in a compact, solid package. It’s particularly adequate in daylight, with sharp detailed 1080p and accurate color. The audio is great too. Despite a few little usability issues, I would recommend this dash cam for those who are looking for a compact cam with good video.

Vantrue N1 Review: Hi, this is Rob from DrekiTech and today I am reviewing the Vantrue N1. Vantrue sent me another dash cam to take a look at, and I’ve gotta say I really like this little one. It’s got good video quality in a compact well-built package, which is why I rated it 4.5/5, and I would consider it a worthwhile option if you’re in the market for a small dash cam.

Initial Impressions and Build Quality: The N1 is quite well made, with a metal build and springy buttons. It feels solid in the hand. It’s about half the size of the R2 and any G1W. Its screen is tiny and only adequate for making sure your shot is lined up. Viewing angles aren’t the greatest and looking at the screen from the side causes color to wash out, but to me this is not a huge issue as I don’t plan to be constantly watching the camera. Despite being compact, with silver trim and the way it hangs from the mount it isn’t as discreet as some all black dash cams. I’ll probably end up painting it black so just so it isn’t easily seen. The mounting hardware it includes is quite solid too: a suction cup with a USB plug and a ball joint built in that holds the camera solid to the car window.

Daylight Video Quality: Daylight video quality with this camera is on-par with other AR0330 cameras – it is sharp throughout the frame, with accurate color and exposure. The framerate is smooth and retains enough detail to read most street signs and license plates. I’ve tested five dash-cams to date, and this camera is on the higher end of video quality. It even has better color, exposure and detail in its 1080p video than its bigger brother, the R2.

Fading Light: As darkness begins to creep in, the cameras video quality holds strong. I do notice a bit of noise, but detail is retained, even if the camera weights its exposure a little on the bright side. Framerate stays smooth and though some license plates are rendered unreadable I still find it’s a little bit better quality than the other cameras, mostly in terms of color balance.

Night Video: At night, the N1 also holds up pretty well but it’s not the best I’ve tested. In situations where there is still a little bit of light – for example city lights or a slight glow of the sunset, I found the camera able to retain decent exposure and colour. Compared to my G1w, which has the same sensor in a different package, you can see that when there is a bit of light on the horizon the N1 is just a little bit better. But the story changes in pitch darkness. The N1 has more contrast at the expense of losing detail in the shadows that the G1w is able to capture. When comparing the same scene to the R2, it’s clear that the R2 is able to take in more light. City driving is this cameras stronger suit. For the country it might be wise to look for something with a little bit brighter sensor and/or wider apeture.

Audio: Audio from this camera is quite good. Here’s a sample: ______ . The microphone tends to be a bit on the quiet side, but what it does record is clear, with good tonal range. It’s not a professional mic by any means, but it is still far better than the muffled tin-can type mics on other dash cams.

Still Images: The N1 can’t take still images on it’s own. I always found still images from dash cams a bit silly anyways – at the point where we’re able to get out of the car and manipulate the camera to take photos, I’d rather just use my phone. But one cool feature is that it will ‘screenshot’ the video while recording if the camera button is pressed. This is great for when I see something cool that I want to capture without having to review all the footage later.

Usability: The main reason why I knocked off half a star from this camera were some minor usability issues. They are things that can likely be fixed with a firmware update that I made Vantrue aware of during my testing. The first is that if power to the camera is cut during camera startup it will shut down and fail to record. If your vehicle is like mine and cuts USB power while it is starting, this could be a problem. I found that I had to wait an extra second when starting my vehicle on to ensure that the camera had adequate time to power up before power was cut. It is a very specific timing issue and for the most part once I got used to it I didn’t have to worry. The second thing I noticed is a bit of an odd one… Part of my testing is to mash buttons on the device to see how it would hold up to someone who doesn’t know a thing or two about technology. I managed to change a bunch of settings on the camera by button mashing that made the video basically unusable: essentially it upped the exposure and turned off record on start, and these are options that aren’t even listed in the main menu. After resetting the camera all was well, but it’s worth noting that these settings are not easily accessable to fix if you happen to change them somehow like I did.

Etc: I tested the parking mode on this camera with it connected to a USB battery pack and from what I can see it works fine. I believe it has to be manually enabled though. The user interface of the camera is fairly straightforward too and slightly better designed than other AR0330 cameras. Unfortunately certain settings are missing – like exposure compensation – but I found the exposure good enough that I didn’t need to change it anyway.

Conclusion: Overall the Vantrue N1 is a viable camera with good overall video quality, a great build and quality mounting hardware. It’s a camera to take into consideration if you are in the market for a compact dash cam.