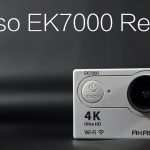 This is a review of the Akaso EK7000, a low end action cam that uses deceptive marketing techniques in order to generate positive ratings. Well, put it this way: the camera does take video at 1080p, and it’s actually OK. But this camera does not take nice still images and calling it 4K capable is an absolute joke.

An end user might not ever know the difference between this camera and something higher quality, but from the perspective of someone who has handled a lot of these devices over the last year I have to say the value for the money on this one is just not there. This camera is just a rebrand of a generic that sells for $40! The 2k and 4k video is just choppy and looks compressed to heck, and the still images are weirdly cropped and low resolution. I’ve seen a few Youtube videos that wrongly say this camera is better than EVERY GoPro and action cam and that just frustrates me. This camera is not in the same league as the modern Go Pros, let alone the Sony X3000 or even some other budget cams that are the same price. So after seeing all these positive reviews floating around I was wondering what the makes this camera so special. It’s just a rebrand of a generic low end camera, how can the feedback on Amazon be so damn positive?

Well, let me take you for a moment to the unboxing. See thing is, I always film the unboxing incase anything special turns up, but I don’t usually have enough to say to make it interesting enough to post it online. This time was… different…

A card is included that outright states the buyer will receive a free gift for a 5-star review. Oh my gosh that is dirty… I think I’m starting to understand why this camera has so much positive feedback. It was at that moment I knew that this review would be an utter train wreck. And let me just say: if you’ve made it this far, I don’t advise buying this camera because there are better options available for less money. Yeah, sure, the 1080p video is OK. But that’s all the Akaso really has going for it. For a moment I’m going to put this company’s sketchy business practices aside and focus on the actual camera form and function, because of course that’s the most important thing, how it works right?

Let’s take a look at this camera from a hardware perspective. It seems to be based on the Sunplus processor, which is like buying a the generic store brand equivalent of your favorite food at the supermarket, and the image sensor this camera uses is only 4MP even though it is advertised as 12. Real 4k video needs more resolution than that! The camera is all plastic, textured on the sides and has a micro USB for charging. It takes micro SD cards, supposedly only up to 32 GB. The battery door is on the bottom and comes open with a finger nail or something sharp.

The video samples I am showing are in 1080p mode, and as I said it is actually alright. The camera has decent colour tones and exposure. It tends to be a little too contrasty which makes bright highlights too bright and dark shadows too dark. Now lets look at this same shot in 4K. Oh, wait, I couldn’t actually get this shot in 4k because the camera froze up on me. I had to pull the battery to get it to restart. Finally, 3 tries later I got the 4K to work. If anything, 1080p looks better! Compare this to another camera with real 4K video and the difference is immediately apparent. The camera that shoots real 4K video has far more details on things such as the trees whereas the Akaso is smudged and – well – awful. 1080p video is decent even as the sun starts to set, but once it gets darker everything fades away into blurry video noise. As long as you’re in 1080p30 here it’s not too bad, but this cameras is really a daytime only shooter.

Audio from this camera is probably what surprised me the most. It’s actually good. I can hear myself talking pretty clearly even with the waterproof case on. With the case off, audio is louder and clearer and not distorted. Koodos, cheap budget camera. This is one thing you do right.

Unfortunately that brings us to still photos. And I say unfortunately because the firmware of this camera is very poorly optimized for still photos. The sensor itself is only 4MP, and its in 16:9 format. Still images are cropped down to a 4:3 aspect ratio, meaning that a lot of information on the sides of still images is lost. The resulting image is only 2.7 megapixels. Akaso tries to solve this problem by then resizing the image up to 12 megapixels, and claiming the camera is capable of this resolution! Well, no, it doesn’t work like that, and it’s impossible to make details where there are none. Check out this comparison between a photo taken with the Akaso and a real 12 MP camera. The added details in the real 12MP sensor makes a big difference especially around the antennas and the little fine details in the background here. The Akaso is just a smudgy mess. The thing is, this comparison is unfair in the Akaso’s favor. Despite both cameras being listed as 170-degree lenses, the Akaso is a much narrower field of view. Keep in mind that I had the cameras mounted on my custom built comparison mount and were taken within seconds of each other.

Battery life, expect about an hour of recording at 1080p60. At least the camera comes with 2 batteries.

So, all that being said, you’re probably wondering how can this camera have such overwhelmingly positive feedback? Surely 800+ people would not sell themselves for a free cheap 32GB SD card… Here’s the thing. This free SD card? It targets the average user, not one with technical skill. These are the kinds of people who don’t really understand video quality, interal components and their reliability.

Look, I’ll be honest with you. From the perspective of an average user who doesn’t care about video quality, the 1080p60 is actually OK. I’d even consider it acceptable. Buuuut there are far better cameras in this price range. The 4K video is poor quality and the still images are terrible. It irks me that there is so much misinformation surrounding this camera and so many positive reviews online. Why not buy the Soocoo C30 for $60, and get a real 12 megapixel sensor, AND image stabilizer? Or spend just a little bit more than this and get yourself a real 4K camera? The Thieye T5e regularly goes on sale for around $100 on Gearbest. But if you REALLY think this Akaso is the camera for you buy the generic from Gearbest for half the price or the Eken H9 for $20 less because they’re the same damn thing.