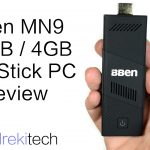 Today I’m reviewing the Bben MN9 stick pc. I’ve seen these things floating around on Amazon and Ali Express for a while now and always wondered whether or not they were any good. Well, it really depends what you want to use it for. I just wanted something that could play Netflix in 1080p, browse the web and occasionally run Photoshop when I needed to edit a single image, and for that it works great, but it’s worth noting right away that the processor in this thing is not capable of doing much heavy multitasking or running programs that take up a lot of processor power, especially games.

The package this stick comes in is rather flimsy, and I’m surprised it survived international shipping. The box only includes 3 components: the computer itself, a power cable and an HDMI extension lead. Looking at the stick itself, there’s the HDMI out port, the power port on one side and the micro SD and USB ports on the other. The top has the power button and the bottom has grilles for heat dissipation. The case is covered in some soft touch rubber that scratches rather easily. Nothing about this screams quality but it’s not terrible either.

Setting it up was super easy – plug it in to HDMI and power, plug in the receiver for my wireless keyboard mouse combo and then turn it on. Startup is quick, faster than my projector can turn on, so I hardly even noticed it. The stick immediately found my Wi-Fi network, I connected my Bluetooth stereo, and then I started installing apps. For day to day operations everything is just a little bit on the slow side especially when it comes to multitasking, but it’s not unbearable. I’m coming from a midrange gaming PC where everything is fast and snappy but if you’re used to fairly low end computers from the last few years things like browsing the web, installing programs and loading documents will not be much different. Where I noticed the slowness the most was on content rich pages: for example the thumbnails on Netflix took their sweet time. I wouldn’t expect this computer to be able to handle 4K video, but it did fine for 4K playback when the file was on the computer itself but I can’t say the same about 4K streaming. Sites like Youtube, Facebook and Twitter all run fine too. Even Photoshop CS5 ran alright for quick photo editing. For the most part the computer is alright – I’d call it fine but not fast. If you run any benchmarks though the results are really, really low.

Now, the one thing that this computer doesn’t do at all is gaming. And I mean like, at all. I installed steam just to humour myself but uh. Yeah. Yeah… It wasn’t worth the storage space it took up. Basic flash games in browser run fine most of the time and so does solitaire but anything more than that and the stick just bogs down. I even tried to emulate Playstation 1, which even cheap Andriod boxes can usually do, and while it worked it did skip frames and jitter a little too much for my tastes. If you want to play games, this is not the device to buy.

It’s also worth noting that the internal eMMC drive is quite slow, with less write speed than a fast SD card. Thankfully it is a faster read speed for playing video.

The one biggest concern I have with this computer is about the heat it makes. One of the reasons I bought this stick over the others on the market is it advertised having a built in fan, but that’s only half true. The fan is kind of like a case fan more than an actual processor heat sink, meaning it does suck some hot air out of the case but it doesn’t do much more than that. The computer idled at 65 Celsius and I was able to push it to 85 when running benchmarks and difficult tasks. This processor is able to handle up to 90. I never got it to shut off due to thermal overload, but I do suspect that if I had it in the sun on my desk it wouldn’t do so well. After running it for a few hours watching TV, the case is noticeably warm, but not uncomfortably hot. Because the heat dissipation is fairly poor, the device is quick to throttle itself down under stress, which I think has the biggest effect on performance. For example the Playstation games ran fine for the first minute or two, but once the temperature started going up due to processor stress, the game started skipping.

Once the novelty of having a full windows pc in a stick wears off, you’re left with an overall slow but serviceable pc. It’s more or less what I’d expect from hardware at this price point so I can’t exactly fault it. The thing does run Netflix and Youtube at 1080p fine after all, and that’s primarily what I bought it for. In my case I didn’t want to have my giant gaming PC with its noisy fans running whenever I just wanted to stream some TV so I decided to buy something cheap to smarten up my dumb projector. I couldn’t stand the Android TV boxes so this was the next best thing. It’s otherwise hard to think of a specific case where I’d recommend a PC in this form factor over something like a tablet or a full size desktop because it’s stuck somewhere in the middle ground where it doesn’t really do either fantastically. It’s not so slow that I find myself annoyed with it, but there is a noticeable speed difference between this and something a little bit higher end.