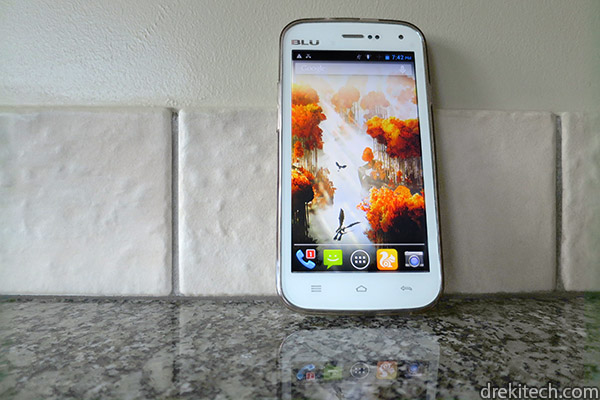 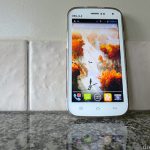 The Blu Studio 5.0 II is a bit of a mixed bag in terms of specs. Where some of its features outperform other devices in its price class others fail to impress. And with newer, cheaper devices being released monthly (even some more by Blu) this phone is already dated.

You might want to look into purchasing the Studio 5.0 LTE (Amazon USA Link) as an alternative to this device. It has double the ram and a better processor at a lower price point, but the screen is smaller.

In terms of appearance this phone is an immediate Samsung rip off, therefor it doesn’t really do anything to stand out. The body is made from slippery plastic, but it feels rather nice and the battery door snaps in to place tightly. Additionally, the buttons have a nice click to them and all the ports feel snappy.

This is a low resolution 5.0 inch screen (960 x 540 px). The first thing I noticed is how bright the colours are. It is comparable to my HTC One M7. However, where it cannot keep up to the flagship phones are in resolution and viewing angles. While the viewing angles are pretty good, the color washes out a little bit when looked at from the side. And the low resolution makes images appear jagged. Where this would be better is for an elderly person who needs larger on screen fonts.

The 5.0 MP camera on this phone ranges from acceptable to poor. Images aren’t fantastic but they’re not awful either. In good light they provide decent sharpness and color – albeit with a slightly purple tint to the white balance. In poor lighting they’re not as good, with noise reduction smudging any detail. The camera is pretty slow to take pictures as well. The 0.3 MP front facing camera is pretty awful. Overall, it’s not that bad for the price bracket, but it could be better.

Battery life on this phone is great. In every day usage I go through about 60% of the battery in a day. If I’m just talking a few minutes here and sending a few texts there I’ll only go through 10-20%. The real battery drain is screen-on time and things like videos or the camera. I accidentally left this phone on in the drawer for a month after writing this review (Wi-Fi on and mobile network off) and it only went through about 5% of its battery.

Everything here works as it should. In fact, the mobile signal seems stronger than my other phones, even if data speeds are limited to H+. Wi-fi and Bluetooth are as expected.

I’ve noticed that music through the headphones sounds a bit lacking. It seems to be not as “whole” as music should be, mostly in the mids and lows. An equalizer fixes that but out of the box it’s a bit subpar. Calling is slightly muffled but overall okay. The onboard speaker is passable.

The phone comes with a clear TPU case that tends to discolor over time. Get a colored phone if you plan to use the TPU case then you won’t notice it discoloring as easily. It also includes a screen protector. Also Blu’s version of Android is basically stock. I don’t believe it’ll get an update from 4.2.

Overall I found this phone to be an average burner phone. Instead of paying out the knee to fix the screen on my out of warranty flagship, I grabbed one of these and it survived for the four months until my contract was up. Since the phone is unlocked I’ve been using it with an international sim ever since. This device itself is becoming irrelevant as components get less expensive, but Blu as a brand has some quality budget items.