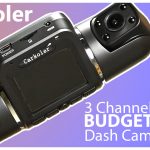 Included in the Box

My copy from Amazon Canada did not come with the advertised hard wire kit that the US version comes with so I did not test that.

I was highly skeptical when I was approached by this seller to review this camera. But curiosity got the better of me so here we are.

This camera is plastic, light weight but feels surprisingly solid. Both front facing lenses have a high degree of flexibility for placement as they rotate 180 degrees and turn left/right however I notice that the video files they record are upside down. I cannot find a setting to flip the video (it may exist and I am just missing it. Maybe on the app, will have to test later). On one side there is infrared for interior placement that does automatically turn on at low light levels. There is setting for basic parking mode (requires further testing/investigation) and also some LDWS and ADAS although with the video perpetually upside down I have not been able to get this working.

The user interface is straight forward however the video feed displayed on screen is a catastrophe. When mounted in the car all of the video feeds overlap each other and some are stretched wrong and some are the wrong way around and I cannot emphasize enough how chaotic it is. Getting the camera lined up right required intuition and checking on the computer.

Once set up though, the camera fulfills basic functionality. It turns on and off with the vehicle and records while driving. It seems to get pretty hot.

The front camera is supposedly 1080p but due to the low end processor a lot of detail gets lost in compression noise. There is some smudgy and blocky artifacts that blur anything in motion and make it difficult, if impossible, to read license plates of oncoming cars. I can read plates and some street signs when I am stopped at a traffic lights. In the day time exposure is mostly accurate. I can tell what is going on. And as you’ll see in the 3rd screenshot there is actually moments where the camera surprised me. Also I checked a few short clips and there is actually 30 unique frames. But yeah anything at speed sees some rather notable motion blur. Maybe it’ll be better in high sunlight (damn these dull winter days).

So far, the video is actually passable. I was expecting way worse. It is pretty on par with other low end 1080p cameras. Even night footage is passable, bright but a little bit blurry. Twilight footage is very good.

I actually think this is rather clever how the designers managed to cram 3 channels into such a budget dashcam: they made the rear channel one video feed and tinkered with the resolution to make it some wide angle, but effectively lower total resolution than a second 1080p stream.

There’s only a single video file generated from these two cameras at 2304 x 648 pixels. Just a hair under 720p each. But you know what? That’s entirely fine. The video quality from these cameras during the day is entirely adequate, even if the frame rate is only 25 FPS. Personally I do not need enough interior resolution to see every individual hair on my face. Note that I had to flip one channel to make it right-side-up.

As you can see there are similar issues with motion blur and compression on the rear and interior camera footage.

Night footage is passable. With all 3 cameras it is a blurry when in motion however it is still possible to tell the make/model of some cars as well as street information and the colour of traffic lights. It is brighter than many budget cameras as well. However expect some grain and it is also impossible to read license plates.

I think it would be fine as far as basic dashcam function goes and the video quality is quite fair for such a low price point. The downside to the video is that it is fairly crunchy and it makes license plates at speed basically impossible to read. The primary function of a dashcam in the sense of recording the road, red lights, street signs, you’ll pretty much get the gist of whatever is going on. I can tell most makes and models of cars. Fine details are lost though. For anyone who is a pixel peeper, this dashcam is best avoided. As well, reliability is open to question as this dashcam comes from an unknown supplier.

And .TS files are a pain in the butt to edit. I had to convert with Handbrake which caused some issue. The files are flagged as 29.97 FPS in media info but there is only 25 frames per second (no duplication, just only 25 frames) so when re-encoding it went from being more-or-less smooth at 25FPS to a bit stuttery in the YT video. Handbrake thought it was outputting at the correct FPS but it was not. The stutter is not there in normal playback.

My main concern with any budget camera like this is longevity. Who knows how long it will last with regular use? My testing ~2 weeks with 30 min daily commute each way does not reflect usage in high temperatures (as it is winter). Unfortunately because the cam is so big, it takes up too much space to keep on my windshield for long term with the other cams I have in my queue to test.