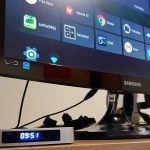 As far a basic Android TV Box goes, the Scishion AI One gets the basics down and has better specs than some of the competition, but a couple limitations hold it back from being an easy to recommend device. When used with an Ethernet cable the device performs fine, however the 2.4ghz-only wi-fi makes it near unusable in an apartment even one room over from the router.

The AI One looks like metal but is actually made from a thin plastic. On the front of the box there is an extremely bright LCD display that shows the time. One side features the USB ports, while the other has the Micro SD slot. The back of the device has HDMI, ethernet and optical audio out.

The design is not exactly flash, perhaps a bit reminiscent of mid-2000s devices with the fake plastic and subtle round edges. It should fit in with other devices around the TV and not stand out. It feels put together well enough, roughly average for cheap Android boxes. Real metal would have been appreciated here.

Given the relatively low end processor, Android 8.1 runs surprisingly well. Day to day tasks feel snappy when running on Ethernet, although some sluggishness can be noted on 2.4ghz Wi-Fi even near the router. This Wi-Fi networking on this TV box is its weak point, slowing the device to a crawl one or two rooms away in an apartment.

Video playback is handled with relative ease. At first there was a weird issue with Youtube videos getting all squiggly and wavy mid video, but changing HDMI cables solved that. Up to 4K at 30FPS was tested. Word processing and browsing simple websites was speedy. More complicated websites take noticeably longer to load on the AI One compared to even a basic Windows box. Thankfully the AI One includes 4GB of ram, which makes a big difference when it comes to task switching. Android can be pretty aggressive about closing background tasks on low end devices, and the AI One keeps them open for longer because it has more memory to work with.

Don’t expect to game much on this device. It was struggling to hold a decent frame rate with even a PSx Emulator, and many emulators we have tested on other devices are absent from the Play Store here due to incompatibility.

Youtube is stuck at 720p or lower, and there’s no HD option on Netflix.

The selling point of this TV box is its relatively recent Android release. This should be more secure than other cheap TV boxes running older versions of Android.

The TV box has a straightforward user interface. Turning it on shows a list of favourite apps, followed by a list of all apps. Here’s where things start to get a bit dicey though: the included Android launcher has some issues with rearranging apps on these lists and we would suggest switching to something else for any sort of customisation. Nova Launcher comes to mind.

Task switching crashes when pulling up the list of running tasks so the only way to switch between tasks is to do it the old way – hit home, find the app to switch into, then select it.

Voice input is a useful feature but it requires the default controller (which takes up a USB port). Press and hold the voice button while speaking. Accuracy is only as good as Google Assistant, and after playing around with it for testing purposes that feature was not used again.

Don’t expect any firmware updates for this box, unless someone makes a custom rom.

The AI One is a decent enough TV box for daily tasks such as watching TV and basic web browsing. There are some compatibility issues with Android 8.1 and the wi-fi sucks, but if those two things are not a big deal then it seems like an overall reasonable choice