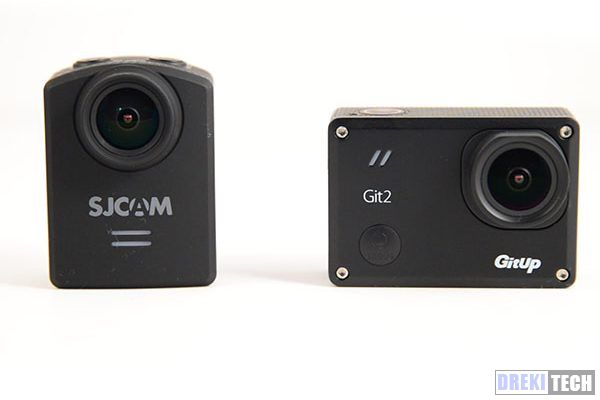 Winner: SJCam M20. It’s worth noting that appearance is largely a personal preference, but I do have some reasons why I prefer the M20 over the Git2. The screen of the M20 is flush to the back of the camera, which gives it a more professional look. With the screen embedded into the camera on the Git2, it is harder to clean and picks up more dust. The M20 is slightly smaller and lighter. Since it has a unique form factor, I have found it to be a conversation starter.

Winner: SJCam M20. Both cameras are about equal in terms of sharpness and detail, but the SJCam has more natural and life-like colours in its default settings. The Git2 has many tweaks that can improve its base colour balance but by default I’ve always found it to emphasize greens and yellows too much which results in ugly, unnatural colour. Otherwise most things about the cameras are very similar. They both have an effective gyro stabilization. The M20 has a little more lens flare than the Git2.  The video from both cameras looks very good in daylight.

Winner: Gitup Git2. At night and in low light, both cameras jitter and smudge frames together in 1080p60 mode. The Gitup does a better job of handling noise, however, and video from it stays usable for longer. Also, the Git2s gyro stabilization stays effective for longer than the M20s.

Winner: Gitup Git2. With the waterproof case on, it is near impossible to hear any audio from the M20. On the other hand, voices are audible from the Git2, so it is the clear winner in this category. Audio isn’t fantastic from either camera but at least it is usable from the Git2. Plus, the Git2 supports an external mic.

Winner: Tie. With similar sharpness and amounts of detail, there is little difference between the way the two cameras shoot still images. I find the SJCam does slightly better in colour and exposure by default, but photos from the Git2 can be tweaked with in-camera to personal preference.

Winner: SJCam M20. While filming my sample footage, I was able to record an additional 15 minutes with the SJCam than the Gitup, from a full battery.

Winner: SJCam M20. The reason the SJCam wins in terms of its buttons is because it has an extra button for scrolling through lists. The Gitup has so many options that often I find myself scrolling past the one I need then I have to go through the entire list again. With the SJCam, I can just scroll up or down to change the setting I need much quicker. One thing I prefer about the Git2 is the one-click recording. When the camera is on but the screen is off, it only takes one press to start/stop recording, whereas the M20 takes two. The confirmation beeps are far louder on the Git2 as well.

Winner: Git2 Pro. The M20s screen looks nicer because it is flush to the body, but it washes out in daylight which makes it hard to judge whether video from the camera will be exposed properly. The Git2 is easy to see in daylight

Deciding between the two cameras it is largely a toss-up. Which one to buy depends on what you need more from your camera. If you’re in the market for a camera that has many features and tons of settings, the Git2 will be the better option. It excels in low light performance and has a slightly better Gyro stabilizer. If you’re looking for a camera to primarily shoot with during the day and do not require critical audio recording or advanced settings, the M20 is the better bet, as it is straightforward to use and has more natural colours. Controlling the camera is easier thanks to the additional button. In my opinion, the best camera would be a combination of the two: I love the M20s form factor and color reproduction. I just wish it had more settings so I could customize things like shutter speed and white balance.