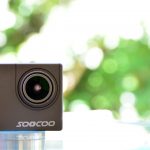 The SooCoo C30 represents one of the best cost versus performance ratios currently available on the market and has excellent value. I would recommend it to those who want a cheap action cam as it has all the necessary features: a Sony sensor, decent still images, smooth 1080p60 and a gyro stabiliser. My only complaints surround the user interface and a little problem with the colour in direct sunlight. Overall, though this camera is not perfect, it is a great deal.

The SooCoo C30 has a Sony IMX078 sensor and a Novatek processor – a combination that produces some solid video at a budget price. Needless to say I had some high expectations for this camera. I can say that for the most part it met those expectations and despite its flaws, this is a camera I can recommend to those who are looking for a cheap action cam that will produce very good video.

I’m going to keep this introduction short. All these action cams are designed more or less the same. The buttons feel very good, the screen looks sharp, but the mounts are a little cheap feeling. The only other thing that really stands out in not such a good way is the user interface. The menus are not very well laid out, as all the settings are mashed into one list and not broken into groups. This is something that could be fixed with a firmware update, but right now it’s pretty messy. Also, the instruction manual is quite poorly translated. I’ll post a quick setup video later for you all (on Youtube).

In terms of video quality this camera is great – especially considering the cost. The video is smooth in 1080p60 and 2k30, with a good amount of detail and accurate color. Despite there not being a selection for bit rate (there is a selection for sharpness!), the video the camera outputs is visually appealing and pleasant, equal or better than any other action cam I’ve tested to date. I didn’t touch 4K for long and I suggest it be avoided. The cameras processor is not capable of rendering 4K so it’s faked, unfortunately doesn’t look very smooth. Expect a maximum usable resolution of 2K with this cam. This is the same with any camera in the sub $200 price range currently.

Night video is alright, but nothing to rave about. Once it starts to get dark out, the camera blurs frames together. It becomes unusable at about the same time I’d need lights to ride. So I’m not dinging any points from it for that, but do note if you plan on riding in the dark you’ll probably want to invest in a camera specifically made for that.

This camera features gyro stabilization. I found it did work pretty well, but it was not as effective as competitors. As it stands it does work OK and the results are far better than cams without stabilization, but it doesn’t react fast enough to hit harder bumps when mounted to the handle bars.

The camera is only capable of 12 MP still images. So-called 20 MP images are upsized and more for hype than anything. The images themselves look OK – they won’t win any awards as there is a decent amount of smudging, but they’re basically identical to the images shot with the SJ5000x. I’d be hard pressed to see the difference unless I actually tested the cameras side by side. For most users it’ll be acceptable, but for better still images you’ll need to move up to the Sjcam M20 or the Git2 Pro.

There is one other little quirk that annoys me about this camera : it doesn’t beep to confirm recording/stopped. It has a voice that says “recording” and “stopped” which is near impossible to hear with the waterproof case on. Combining that with the poorly laid out menus means this camera isn’t as user friendly as competitors.

Compared to the Git2, I found that the video straight from the C30 looked better overall. Both cameras render a good amount of detail, but the C30 has better white balance and video overall looks much smoother since it doesn’t suffer from micro stuttering. The Git2 wins in a few places though – it has a significantly better stabilizer, and thanks to a low contrast mode, the Git2 can produce video that is much easier to touch up in post. My suggestion is that the C30 will suit most people a little bit better, because out of the box video is more appealing, however those who want the ability to stretch their image a bit further will prefer the Git2. Also the Git2 has better still images.

Compared to the SJ5000x Elite, video is essentially identical. I don’t have the SJ5000x elite on hand to test against it directly, but from comparing footage I shot with the cam a few months back I’d honestly say there’s no reason to buy the 5000x when you can get this cam for $40 less. In terms of color, contrast and even stabilizer, they’re basically the same camera. I prefer the user interface of the SJ5000x, but I don’t prefer it 40 freedom bucks more.

My advice if you’re waffling between this cam and the SJ5000x, buy this one. Spend the extra money on some additional batteries, a charger or maybe some high quality mounts.