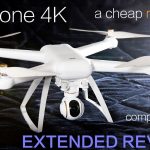 In the unboxing I mentioned how solid this drone feels and I stand by that comment. The build is a solid textured plastic and this thing is heavy. The step up from a $200 drone to a $500 drone is quite apparent here in the way the drone is designed and built. It is quite handsome with its white textured finish and gold highlights; albeit this design is very similar to some DJI drones. The drone is slightly modular for transport: the propellors and the camera are easily removable without tools; and then the legs fold in making it almost entirely flat for transport. This is a big drone, though, so it is not the easiest to travel with.

The only thing about the build quality I am not fond of is the way the battery is seated. It is very difficult to remove. I’m sure that this is to prevent the battery from falling out during flight but the thing is there’s no dedicated lock switch or even a solid click in place when the battery goes in, and I’d rather rely on a more solid lock than a simple clip and friction.

The memory card goes into the ball of the camera. I’m going to make an important note here: this drone cannot read cards that are formatted in EXFAT which means that you can only use up to 32GB. It seems to be fairly picky about cards too so make sure to use a fast brand name card or you may get card errors while trying to record when it runs out of buffer.

The app works well enough on Android phones. Plug your phone in by USB and turn on the controller. Wait for your phone to detect the controller then enable USB tethering from your settings. Switch back to the app, where it will attempt to connect to the drone.
Once connected you are greeted with this world map view. From here you have the option of viewing the drones location on the map or viewing the video life feed. At the top of your screen here you can see the status of the drone and it will say “Could take off” when it’s ready to go. If you get a compass error at this point, I’ve found that picking up the drone, turning it left then right then placing it back down fixes this.

There are a long list of options. You’ve got your beginner mode, which limits altitude, speed and distance; ATTI mode which is more of a manual flight mode, along with different GPS settings, camera settings and max altitude settings. The only setting I would like that I haven’t been able to find is a sensitivity curve for the controller sticks. I find that the controllers are very sensitive and bank hard left or right with a slight tap.

On the video feed mode you can start or stop recording, or switch over to photo mode and take pictures, but there are also buttons on the remote that do this and they’re far easier to reach.

From power on to take off takes about 2 minutes of fiddling. Unlike a manual drone, the Mi drone needs to find a solid GPS signal, warm its batteries to an optimal temperature, align its compass, and do a bunch of pre flight checks. This is because the drone needs to know where to return to if it runs low on battery. It is a good thing because that makes it a lot more difficult to lose the drone but it also means that if you have a critical and time sensitive shot sometimes you may miss it while the drone is starting up, and I really don’t recommend rushing the startup. If you take off too quickly and the GPS is not locked, the drone may act up for the first minute or two of flying.

Once it’s in the air though it handles great. The initial settings are a bit slow but all that can be adjusted via the app. As I mentioned earlier there is a beginner mode, which limits speed and range, so it’s easy to start with. There is an automatic takeoff and landing function too. This drone is so easy to fly that my parents could do it (and they’re not tech savvy).

I took it out on an extremely windy day to see how well it would hover in place and it did not move more than a meter in any direction. The drone was being pushed back and forth by the wind like crazy but when looking at the footage of it from the drones perspective it did a very good job correcting this.

Range will depend heavily on location. Near the city where there is lots of interference I noticed that video signal will get, at most, a few hundred meters. Out in the farm fields I got way farther, about 2 KM with a reliable video signal. I also noticed that the direction the drone is facing will affect video signal range too – with the camera facing away from the controller it goes farther with video signal.

Thankfully if the drone does go out of range it will not fly away or fall out of the sky. It starts returning to its launch point based on the parimeters you set in the app. When it does get back in range you can control the return to home with the thumb sticks or cancel the return to home.
There is no collison avoidance though so you really need to pay attention to trees and buildings when it is doing its return to home, or if you set a way point for it to fly to. If you do set way points with different altitude it will be a smooth rise to that altitude so if something high is in the middle of your way points it will not go up and around. You can specify return to home altitude in the app, which I recommend double-checking every flight to ensure that you won’t hit anything if you do lose connectivity.

Video footage is extremely crisp and stable. It’s almost entirely free of micro-stuttering and micro-wobbling and it looks excellent displayed on a 4K screen. My footage looks great, even as as someone who is still learning techniques for flying and filming. A lot of the footage I’ve gotten with the drone looks like it could have been shot by a seasoned veteran.

All of the footage you’ve seen so far is shot in the default settings, 4K at 30 FPS. The drone also has a 2.7K at 60FPS mode and a 1080p at 100FPS mode for ultra smooth slow motion. All modes are stabilized using the gimbal. The best mode, for details, is the 4K30 and the 2.7K 60. The other modes I wouldn’t touch unless I was shooting a project that specifically required 100FPS because the difference in detail is quite significant.

4K has heaps of detail even when viewed on a big screen. Noise is kept to a minimum during the day time and colour is accurate for the most part. The default footage tends to expose a little on the darker side in order to prevent highlights from being blown out, but this results in footage that is ideal when post processed – not necessarily ideal right out of camera. There are settings for saturation and it is possible to bump up the brightness when flying but I find the right spin dial to be a little on the sensitive side so it is difficult to bump up the brightness smoothly.

When video files are saved to the memory card they include a low resolution ‘thumbnail’ file, presumably for the app to transfer quickly to your phone if you want to save the footage. I believe this is also the video that is tramsitted to you when you are viewing the feed live.

Transitions between bright and dark aren’t the smoothest, and that’s really the only minor nitpick I have about the video this drone films. Check out what it looks like when the camera switches shutter speeds: it’s not a smooth fade, so it kind of happens in steps.

Many people have mentioned issues with the gimbal horizon being wonky but I did not find that to be an issue. A recent firmware update seems to have fixed it.

No audio is recorded with the video, so if you want audio you will need an external recorder.
Even low-light shots look pretty good thanks to the stable gimbal. The low light footage does not have as much detail as daylight but it’s good enough that almost everyone will be happy with it. I wouldn’t use the drone at night as it will not pick up much detail under street lighting (plus, here in Canada it’s illegal to fly at night). If you’re going to be primarily flying at night I’d recommend steping up to a professional drone with a bigger image sensor.

Still photos, as JPG, are fine. Raws have a lot of noise that requires correction in post processing. I’d recommend sticking to JPG unless you absolutely need to as RAWs from this require a lot of correction to be usable. At least they’re in the common DNG format. When you take a photo, the live feed from the drone freezes for up to five seconds while it is writing to the card.

I’ve stitched photos together into a high resolution panorama and if you take the time to do a dozen or so shots by turning the drone and angling the gimbal you can stitch together a full 360. I don’t believe the drone has a way to do this automatically like the DJI drones do though.
Photo mode is completely separate from video mode and I haven’t found a way to take photos while video is being recorded. It’s no matter, though, as you can extract stills from the 4K footage and they look almost as good as what a full resolution photo would be; just 8MP instead of 12.

The drone is rated for 28 minutes of fly time and that seems to be accurate. I’ve gotten on average, between 20 and 30 minutes from take off to landing depending on how I’m flying and the weather. When the battery reaches 30% it will warn you to land immediately and slow the speed you can fly at, so keep in mind if you’re far away it may limit your ability to return. Once it reaches 15% the drone will automatically land.

So overall would I recommend this drone? Heck yes. I’ve had a great experience flying with it and although it has some quirks, they’re all little trivial things that can easily be overlooked. I’m happy with the drone, and I think you will be too. Keep in mind brands like Mi do not have much in the way of overseas support so if something goes wrong you’ll be on your own: but the good news is that parts are readily available so if you do break it, fixing it can be fairly straightforward.