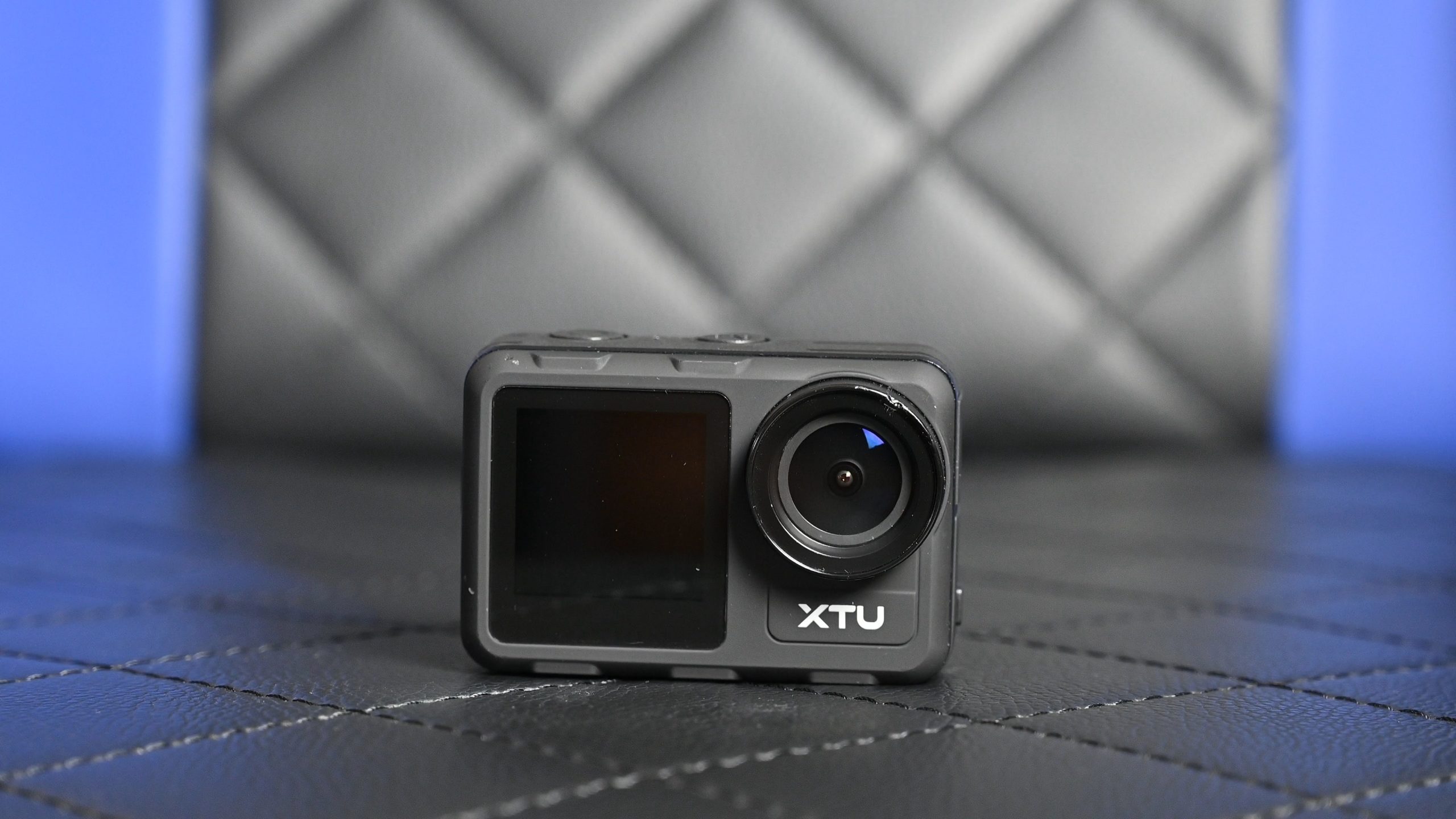 Recently on Youtube we have received several comments mentioning the XTU X1 Max Action Cam. XTU Action Cam, the next Gopro Killer, XTU New Action Cam with an Amazon Link. Most of these comments seem kind of spammy, buy hey, XTU is a company we’ve never tested, and it turns out the X1 Max is real 4K 60. With image stabilization. And actually performs very well! There is a lot to break down about this camera so let’s get into it.

The X1 Max is based on a HiSilicon Hi3556A and Sony IMX 377 processor. The camera appears to be a rebrand of an HDKing FH02A-J. HDKing is a large OEM for action cameras and offers a variety of quality and customization. The camera body is waterproof without an additional external housing but does include an additional housing for extra protection. In the box is a full kit of mounts and accessories, comparable with most budget action cams, and a nice value add over other cameras such as DJI who only include the most basic in the box. XTU does not include two batteries or a charger in the box, but they do include a card which indicates receiving extra batteries as a gift if you leave a five star review. It’s a shame that the comapny is not exactly using honest tactics to gather feedback on their product, as it really degrades trust in XTU as a brand. There’s a high possibility they could disappear off of Amazon since they have used such a tactic and if that happens it is unlikely that you will ever receive warranty support as they are likely not established enough to sell the cams outside of Amazon.

This camera is one chunky beast. It is heavy and feels substantial in the hands. It is made out of a solid plastic that is very stiff, which results in difficult to open battery and memory card doors. The top of the camera has two buttons and the side has the power button. On the bottom there is a tripod screw thread. The back has the touch screen. The camera uses a micro USB port for data transfer instead of the more modern USB type C. Build quality overall feels pretty fantastic, however one notable difference between other high end budget action cams like the DJI Osmo, the lens cover is not removeable so if you do accidentally drop the camera and smash the lens, it may be a challenge to find replacement parts. Notably XTU does include some lens protectors in the box, and using them will keep the unreplaceable lens from scratching. That lens, too, could be better, as it has quite a bit of lens flare in testing.

The screen on the back of the camera is not a true 16:9 aspect ratio, so it has these black bars on the top and bottom when recording video. Instead of large bezels around the screen, we would have preferred a screen that stretched across the entire back and video that filled the display. Regardless of its smaller size relative to the camera body, both displays are vibrant and easy to see in bright lighting conditions. The front screen is not touch and squishes the image even more.

The settings gear brings up overall camera settings (and make sure to disable the video watermark to not give XTU free advertising in your videos), and tapping on the video symbol or pulling up from the bottom offers mode switching between different available photo and video modes.

Overall it is straightforward and easy to use, and this camera offers a lot more settings and customization compared to most budget action cams.

EIS OFF: To start, let’s quickly go through a couple clips with this camera, and EIS turned off. We recommend only turning EIS OFF in moments where the camera is mounted onto a solid steady surface and will not be shaking, such as a tripod landscape scenario where the highest level of detail is required. And that’s what this camera produces with the EIS off: high quality 4K video, with vibrant colour, a good dynamic range and lots of detail. 4K 60 and 4K 30 look great, 1080p 60 is sharp, and 2.7K 60 is a good balance of detail and file size.

EIS ON: Once the EIS is enabled, image quality reduces slightly. “SUPER DIS” mode crops into the image fairly substantially to increase the amount of stabilization, however the image sensor is limited in its overall resolution, meaning that some level of detail is lost at 4K settings. However, this loss of detail is slight, and on par with other real 4K action cams. On a small screen such as a laptop, it will be barely noticeable. We had to stream some of the footage to our 4K TV to tell the difference. And of course, the stabilization makes it entirely worthwhile to film in this mode, as it really does smooth out bumps and jumps and jolts.

2.7K 60 EIS is the real star though, offering a very similar level of detail to the 4K 60 EIS, with a slightly smaller file size. For the most part, this is the cameras optimal resolution as it negates any loss of detail due to the EIS crop in, but it does not sacrifice performance in terms of frame rate.

As well, this camera offers a “Regular” EIS mode, a trade off between slightly less EIS effectiveness and a lower crop level, meaning slightly more detail overall. To our eyes, the increase in distant detail was not substantial enough to use this mode often, and we found ourselves sticking to the SUPER DIS Mode.

One super cool feature we’ve never seen on any other budget action cam is the ability to use the digital zoom at the same time as image stabilization. This is not optical zoom so the video quality is reduced a little bit with each zoom step at 4K, however the possibility for framing shots in camera increases substantially due to the ability to use this function and we found ourselves using it far more than expected. If your intended video output is 1080p, using this digital zoom on camera will not decrease video quality compared to doing it in post production, however the camera does not offer any sort of zoom smoothing and can only process it in steps.

In low light the video quality becomes substantially more blocky and noisy. The image stabilization does work fairly well even as it gets dark, however movement starts to smear as the frame rate drops and any motion becomes substantially more blurry. This is on par with most action cams in its price class. At least under dim street lights it is slightly possible to tell what we shot, with the bushes and trees maintaining some detail.

This camera offers two levels of EIS: regular and super. For the most part, regular EIS mode is typical for budget action cams, offering a small level of image stabilization. It does not crop in very much, and therefore cannot stabilize the image as much. Super EIS crops in substantially more and results in a slightly higher loss of detail. The loss of detail is not all that large though so we recommend using SUPER mode and mostly skipping regular mode. For walk and talk video, Super DIS mode stabilizes the video to a very acceptable level with only small notable bumps and jostles. When the camera is mounted to a bike handlebar, super DIS will stabilize any bumps in roadways or other smooth paths, but is not capable of handling the hardest bumps when mounted to the handlebar and riding trails. The OSMO, despite its poorer mounting solution, actually has smoother video in most cases.

Audio quality on this camera is good. Surprisingly it does not offer much granularity when it comes to microphone gain, with only two levels, normal and high. In normal mode, the mic did a decent job picking up voices at arms length with clarity, although at times voices do sound a little bit hollow.

The XTU does include a tiny external mic, however audio quality from it actually sounded more hollow and less rich so we did not use it often. It plugs in by micro USB.

Compared to Other Cameras

Since the XTU X1 has so much to break down, we will be doing a full video comparing it to the DJI Osmo Action and the Firefly X. All three of these cameras are competitive in terms of price, with the Osmo Action being the camera we recommend for most users. The Osmo has substantially better stabilization, a larger screen, and longer battery life at the trade off of not having a tripod mount in its base. It makes a big difference when mounting the Osmo to things like bike handlebars, where it is clear that the camera wobbles a lot more while riding due to the plastic housing required for mounting.

With the Firefly X there is almost no comptition. The XTU has better EIS, more detail in its video quality and better colour rendition. It’s also much easier to get in North America from Amazon, who will warrant the camera for at least 30 days. The build quality of the XTU is much higher, with battery doors that don’t come unclipped on their own. XTU also includes an additional waterproof housing. The downside for XTU is that the lens is not easily user replaceable like it is on Firefly.

We constantly compared the XTU X1 to the DJI Osmo Action throughout this review, as prices are very similar between these two cameras. Osmo won in most categories, but it was overall very close. We did not expect to like the XTU X1 as much as we did, as its video quality was surprisingly good and the ability to zoom while recording in EIS mode became an asset. That being said, unless you really need the additional accessories, or the camera goes on sale closer to $150, which is $50 less than the DJI Osmo Actions current price, the XTU X1 is not necessarily the best value for the money. We are concerned about longevity of this camera, as XTU has rebranded an off-the-shelf product and offers free accessories in exchange for positive feedback on their Amazon listing. This means that down the road it may be difficult to get warranty service or find parts to repair the camera, especially with the lens being unremoveable. While nearly every clip we took with the X1 turned out very good, we found oursevles gravitating to the DJI due to its better mic quality, superior stabilization and larger screen. Overall, we like this camera a lot, and if it is your only affordable option, we believe you’ll find the video quality to be excellent for the price, the image stabilization to be effective and the included accessories a great value add. We just wish XTU included those extra batteries instead of requiring a positive review in order to receive them.