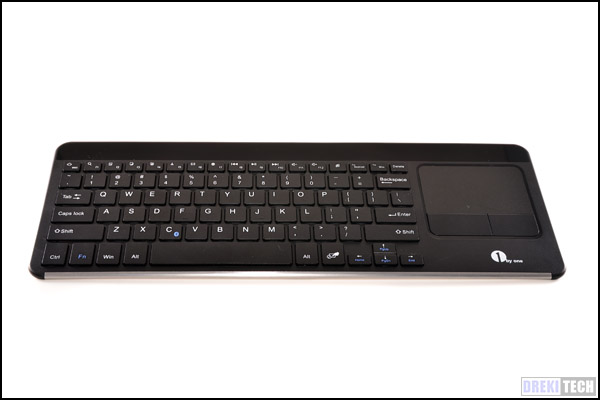 Summary:  This keyboard is one of the better feeling (non-mechanical) keyboards I own, with fast and accurate key response. It is similar to a high end laptop keyboard, with a slightly smaller than average key layout and springy feedback. I can type significantly faster with this keyboard then I can with the other wireless keyboards I own due to the response of the keys. The built-in trackpad feels similar quality, but it isn’t as responsive to touch as I’d like. I find that occasionally it lags and jitters, causing it to sense one finger as two or causing the mouse to jump across the screen. Other than the occasional delay, this keyboard and mouse combo works quite well, and is a nice accessory for Bluetooth enabled android TV boxes, desktop computers and most smartphones.

One of the first things I noticed about this keyboard is how thin it is. The keyboard is nearly flat, with a raised ridge to hold the batteries and prop it up at a little bit of an angle. The underside of the keyboard is shiny metal that picks up a lot of fingerprints. It’s not noticeable unless the keyboard is flipped over, but it looks like a literal fingerprint magnet. Thankfully that part of the keyboard stays mostly hidden. Build quality feels good overall, with a solid feel. The keys do not rattle when the keyboard is shaken and all the switches and buttons are solid.

I was shocked at just how good this keyboard feels. I have used dozens of different keyboards for work, both wired and wireless, and these keys rate among the better that I have tried (as far as non-mechanical keyboards go). I can’t say exactly what type of switch they’re using, but they have a decent click and solid feedback and are not too firm. I’ve tested this keyboard with my Windows 10 desktop, and it has not missed a beat – every key press is registered and there have been no double presses. It’s comparable to a laptop keyboard in terms of size and layout. Those who are not used to typing on a laptop may find it a little on the small side but for most individuals it will be fine. There are a few little quirks with the key layout: for example, to hit ESC, it requires pressing FN first and some multi-key shortcuts don’t seem to work. But for the average user, these issues are fairly easy to overlook. Overall it’s a very good typing experience, especially for under $30.

For the most part the touchpad works fine. I noticed that with my Windows 10 desktop there is a little bit of a delay occasionally. This happens when they keyboard is both near and far from the receiver, and the effect is not present with my tablet or smartphone. It may just be an issue with compatibility and the Windows 10 drivers, but this is the largest reason why the keyboard lost a star. Occasionally, with Windows, the touchpad will register two fingers pressing instead of one, resulting in scroll or zoom in lieu of moving the mouse. Additionally, when moving the mouse across the screen, the computer may not register the mouse movement immediately and will lag a little. It doesn’t miss any mouse strokes and is still usable, but this effect is definitely noticable, moreso with some devices than others.

It’s worth noting that a Bluetooth receiver is not included with this package despite the keyboard having a place to store one. Also, I noticed that the touchpad does not seem to wake up the keyboard when it is in sleep mode. It reconnects almost immediately after pressing the space bar.

The 1byone Bluetooth Keyboard has good key feedback, which allows for fast and accurate typing. The trackpad generally works and is better with some devices than others – Android TV box owners will be particularly happy. Overall it’s a decent package, with good build quality and nice design.