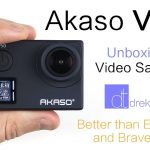 Update: Try the Akaso V50 Pro Instead. It has very similar video performance but a built in touch screen.

The video quality isn’t as clean as something like the SJ7 Star or Firefly 8S and definitely not as good as GoPro Hero6 or Sony FDR-X3000 – it’s quite close though. But overall for the video quality you get versus price, this is a good deal for a cam available on Amazon Prime. Of course, spending this much from an overseas seller will net you a much better camera but that requires import and shipping time.

Included in this video is some drone footage, some biking footage and some driving footage.

Please don’t trust Amazon reviews on this cam, because Akaso has been known in the past to give free copies of the cam for 5-star reviews. Watch video samples and decide for yourself.

I think the V50 is definitely worth getting over the Akaso EK7000 and the Akaso Brave 4 since those are both fake 4K and there are cheaper cams with the same hardware as those two available on Amazon.

If all you need is 1080p, get the SooCoo C30 instead because it’s cheaper, has stabilization, bigger batteries and a real 12MP sensor (fake 4K though).