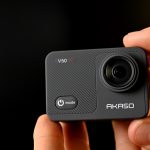 The Akaso V50x is a real 4K action cam with stabilisation at 4K and costs under $100. The $100 price point is kind of a tough one because it is generally where manufactureres start to make sacrifices in order to meet the cheap price, so let’s talk about what the V50X does right, and whether or not it’s a good camera: spolier alert, it is pretty good, but there are a few things about it that might make be a deal breaker for you. I would honestly recommend going for the V50 pro if you can swing the extra $20.

Let’s talk build quality. The V50x is the older action cam style, meaning that it is not waterproof unless you use an external case. The camera is made with soft touch plastic that feels middle of the road in terms of quality. That being said, everything is pretty solid and there’s no creaks or weird flexing when I squeeze or try to flex the camera. The camera has buttons on the top, front and side, and around the back of the camera is the giant touch screen.

And here is my favorite part of this camera: the user interface. Not only does the camera have both buttons or the touch screen to navigate the UI, the whole things is very thoughtfully laid out with fast access to settings by pressing and holding the shutter button so changing resolution or other settings on the fly is only a few clicks away. I am very appreciative of the buttons when many cameras are doing away with them. In the wet or when wearing gloves touch just does not function, so having the option of either touch or buttons is almost revolutionary, especially with the simplicity of navigation that this camera presents. And whats more the user interface is fast, smooth and easy to understand.

If you are going to buy this camera, this is the resolution to use. The good news is that 4K 30 does have image stabilization and it is quite effective in most situations – more on that later. This resolution has an adequate amount of detail albeit a little noise even in bright daylight. Colours are bright, contrast is high and if you don’t like that there is no way to tweak contrast and saturation so you’re kinda out of luck. To be honest, in this resolution, for the most part I found myself satisfied with how the video looked and I feel that most people buying their first action cam, who this cam seems to be the target for, will be more than pleased with it as well.

However there are some minor flaws with the video quality, notably purple fringing haloed around bright objects, and a disgusting lens flare that shows up when you point directly into the sun, so I am guessing that Akaso made sacrifices on the lens quality in order to hit this price point.

1080p 60 on the other hand is a complete opposite beast. First of all, 1080p 60 and 2K 60 look almost identical, I don’t believe there is much difference to them; and second of all they both look awful. It is blocky, details getting lost in crunchy contrast paired with aggressive anti-noise smoothing. A lot of action cam makers these days seem to be neglecting 1080p in favor of perfecting the higher resolutions and it shows where all of Akaso’s efforts went to with this firmware. Side by side with the SJ8 Pro, both filming at 2K60, you can really start to see the difference in things like the blades of grass and details on the trees. I would recommend sticking to 4K, and here is this same shot of the garden in 4K, because the difference is rather extreme. Hell, I would get better video than the 1080p even after downsizing 4K to 720p, then sizing it up again, which I have actually done here to try and illustrate the absurdity of this. Slow motion is only 1080p 90, unlike many more expensive cameras that do 1080p 120.

Image stabilization on this camera is something special in the right circumstances. Walking or running, this camera is near gimbal smooth, out performing other Chinese branded cameras such as the SJ8 Pro. You’ll notice that the V50x is a lot closer up than the SJ8 Pro, and to be honest I don’t mind that. It results in lower fisheye distortion and a bit more focus on the action. Even in extremely tough situations such as with the camera mounted to my helmet the stabilization performs pretty great, until it comes to cornering. This camera is so aggressive about trying to maintain video centering that if you turn too quickly the stabilization freaks out and does not know what to do. It starts to jump and stutter, compared to the SJ8 Pro which, again is not as smooth when going straight, but actually corners properly. I also recommend turning off the image stabilization at night as it causes a bit of fuzz when the shutter speed is slow.

The stabilization qualities make this camera seem like it is suited for vlogging or walk/talk video, but now we come to the biggest downside of the V50x: its microphone. Although Akaso says this camera supports an external mic, at the time of writing this review one was not yet available, and the built in microphone sounds muffled and lacking clarity. Increasing the mic volume in post production does not help.

Night and low light video is kind of grainy with very aggressive noise suppression, but quite frankly I was surprised with how usable it actually is, especially with the image stabilization turned off. This first shot here has it on, and you can see how everything kind of gets fuzzy periodically, as the stabilization tries to compensate for the slow shutter speed. However, turn that stabilization off and video looks shockingly good. It is bright enough under street lighting and keeps things sharp enough that I can generally understand what is going on.

Photos in general from this camera are very good. Colour is accurate, they have lots of detail and overall I think this is one of the better action cams for stills in the budget category. There is a little bit of shutter delay, but I would say less than average at this price. The camera pushes its ISO a bit higher than most others, which means that even photos in low light tend to be sharp despite some obvious noise smoothing.

So, overall, do I recommend buying the V50x? Maybe. It is a pretty solid starter cam that does have some flaws. I think if you are going to primarily film at 4K30 and you do not really care about on camera audio, then this is a solid camera to get. If you are a walk and talk vlogger this camera combined with an external mic would be a killer combination thanks to the great stabilization. Just we’re still not yet at the “no compromise” camera under $100.

Compared to other Akaso cameras? I would get the V50x over the V50 Elite. Despite the Elite being a good camera, the only advantage is has over the X is the better mic, and that is not enough to justify spending so much more money. I would probably recommend the V50 Pro out of all three cams, although it is worth noting that the Pro does have less buttons if that is important to you.