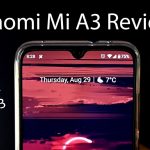 The Xiaomi Mi A3 is the latest smartphone from Xiaomi running Android One – the version of Android that is supposed to be as close to “Stock” as possible. This phone is pretty flashy given its budget price, but a few issues keep it from being an easy recommend, most notably the low resolution screen and the exceptionally slow and inaccurate fingerprint scanner. At its list price of nearly $300 there are several other alternatives to consider. However, if the price were to drop under $200 I would consider this phone to be a far more compelling and competitive choice. Buy this phone if you want a decent camera and great battery life, but don’t buy it if the in display fingerprint scanner is a deal-breaker for you.

The phone itself is solidly built, yet another glass sandwhich and on first glance it looks and feels like almost any flagship. The blue colour is super flash, with these wavey patterns that show up when light hits it at certain angles. I love the colour and the back of this phone loves fingerprints. Thankfully Xiaomi has included a soft case in the box, although there is no included screen protector.

It was at this point in the set up that I started to notice something a bit off about the screen. I could actually see the pixels up close. Well, it turns out the display is 720p. It’s a decent screen but the low resolution is very noticable if you are holding the phone closer to your face. You can see a bit of a grid pattern and occasionally the edges of text are a fuzzy, especially if that text is red.

Funny enough that’s not the deal breaker for me though. Despite the screen being low resolution I could live with that – the brightness level is fine in daylight, it doesn’t get super dim at night but whatever, it’s livable. Colours are vibrant and the black level is perfect. A low res screen has trade-offs for battery life and graphics performance when playing games. I can understand why Xiaomi did it, even if that makes the overall value of this phone lower.

The dealbreaker for me is actually the in-screen fingerprint reader. It is awful. I have never used a fingerprint reader that is this slow and has such low accuracy. When I set it up initially, I had a hit rate of maybe 30%. If I tried to unlock my phone three times in a row, it would consistently fail the first two times.

I tried setting it up again and kept getting errors: fingerprint reader is dirty. Please try again. It didn’t matter if I had a screen protector on or not. I added the same finger two or three times in hopes that would improve hit rate but that just slowed it down and made things even worse. Finally, I was able to get some sort of consistency out of it by using a screen cleaning cloth and cleaning between each time I pressed my finger against the phone during set up. This is exceptionally shitty because previous versions of this phone had near instant fingerprint readers located on the back. The in-screen reader seems to be more about looking modern versus adding a useful feature. Regardless doing this tedious set up, my hit rate is still only about 75%, which is absolutely unacceptable. Maybe software will improve it in the future, but I would not recommend buying a phone based on a maybe.

Set-up is otherwise normal for any modern Android. You are presented with basic options, Google takes all your personal information, definitely normal. One of the main selling features is the fancy in screen fingerprint reader, which you can set up at this point but for your sanity I suggest skipping it and setting it up later.

Other UI things feel a bit slower too. Perhaps it is Android One and its longer animations, but loading apps just didn’t feel all that snappy, and if you are coming from a flagship you will certainly notice this. If you are coming from another low end phone, you probably won’t be able to tell the difference. There’s a few quirks of the UI: for example I am also not fond of how the app drawer is now part of the app switch button. But whether you will like this default basic UI is kind of up to you, and the good thing is you can always add in another launcher.

I plan to write a full camera review eventually. In the meantime, here is the quick rundown.: this camera surprised me, in a good way. The vast majority of photos I took with this camera I was happy with.

The camera set up is a main 48MP sensor that gives you 12MP images and an ultrawide 8MP sensor. There is a supposedly lossless 2x zoom, but in reality there’s no resolution benefit from using it over shooting wide angle and cropping after the fact. In fact any resolution benefit you would expect from the sensor being 48MP versus the 12MP sensor on my Samsung S9 is kind of moot. For the most part the photos look VERY similar. In fact, if you showed me pics side by side I’d have a hard time deciding which camera shot which.

There are some differences though, and this is where the 48MP sensor starts to show its weakness: dynamic range, which is the difference between bright highlights and dark shadows. Lower res sensors are able to gather more light information per pixel so they tend to have better dynamic range, more detail in dark shadows and bright highlights. And occasionally I found that the Mi A3 would turn bright things white where my S9 would still have details.

Surprisingly at night this camera is fairly capable. Almost every photo I took turned out sharp with lots of detail. Objects have plenty of detail with noise well handled; that is until you look at smooth gradients such as the sky. In the sky you’ll see the weakness of the high res sensor again, where it can’t gather enough light information and that results in this grainy noise.

Funny enough the lower res ultra wide camera is not better at night at all, so it goes to show that a high quality sensor is paramount for image quality before any resolution vs pixel size. All quality issues aside with the ultrawide camera, I am still glad it is there. My ideal camera set up is three lenses: one telephoto, one standard, and one ultra wide but I can see why Xiaomi did go with this set up. The results speak for themselves.

Frankly, if I wasn’t a photography guy, I wouldn’t have thought anything was wrong with these pictures. How about video?

4K video looks decent. There’s a good amount of detail and the frame rate is smooth. 1080p 30 is the best format this camera films though because it is the only video resolution with image stabilization and that helps smooth out light bumps and jolts. Don’t expect miracles. This camera also films in 1080p 60 but the focus jumps around so it is practically unusable. Expect to have to lock the focus at night too, because in low light the focus can jump annoyingly a bit.

The selfie camera I am actually superbly impressed with. It pulls the brightness up in selfies to priortize the colour of skin more than the background. There’s a good amount of detail. I also think the lens does a better job keeping face shape consistent than some other phones I have used which stretch or distort selfies in an unappealing way.

Battery life is where this phone rocks: I can consistently get a solid 2 days of use out of the phone. The 720p screen and mid range processor really help here. Driving less pixels means less processor use, less power use, and this is the only phone I have owned in recent memory where I can use it normally and still end the day with greater than 70% battery. For context, that included chatting, social media as normal, a bit of reddit, a bit of browsing, some Bluetooth audio streaming, Strava and maybe an hour of Youtube watching. I actually have even made it to day 3 with this phone.

One thing I noticed about the battery life after using this phone about two weeks is occasionally the battery meter would hang; for example I charged the phone for an hour, and it only made it to 31% on the battery meter, but then the phone was at 31% for the rest of the evening despite heavy use. This seems like a firmware thing and is kind of annoying.

Let’s talk alternatives: I think there are a few phones out there that are more worth your hard earned money (and I am sure I missed several here so if you have other alternatives to suggest please put them in the comments).

To start, I think the best alternative is the LG V30/V35 (+). Despite this phone being a bit older, it has flagship tier specs and can be found for around $200 – 300. It adds waterproofing, a hi-fi DAC, and a much higher resolution display. You get 128GB of storage by default too. The only thing you really lose out by going for LG is the updates.

Samsung Galaxy A50: This phone is $50 more and has a better screen, but there doesn’t seem to be any official American version. I think this is the phone the Xiaomi is directly targeting in price, style and spec, but I think it is worth going for the A50 if it is available in your market just because of the better screen and local warranty.

So would I go for the Mi A3? Well unless Android One at a cheap price is really your flavor, I don’t really think this phone is a winner. It has too many small compromises to make me feel comfortable recommending it as outright as I have other Mi phones in the past. I think if this phone was $199 I would have an easier time saying yes go get it, but right now at a US local price of $279 you can do better for very little more. I think the alternatives I mentioned are far more compelling.