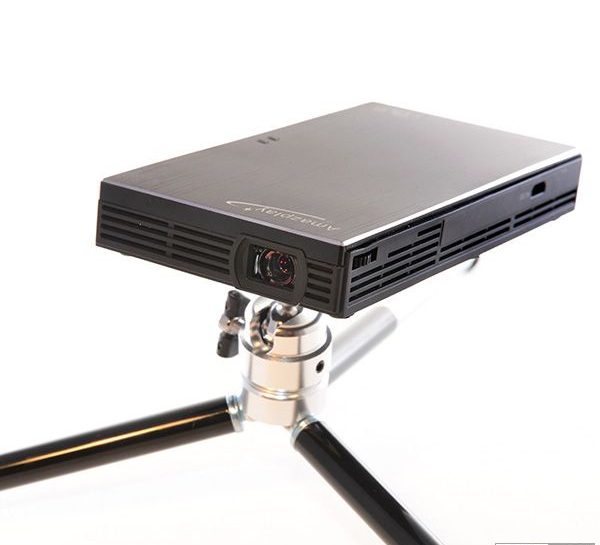 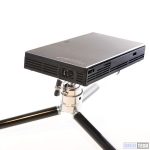 This Amaz-Play HDP-100 projector is a compact projector with acceptable brightness and a sharp picture, but the picture is too blue and the fan is quite loud. It works fine for movies and multimedia but for applications that require accurate colour I would recommend looking at the WH-80B or something with 100+ lumens instead.

The projector itself is very small. Despite being plastic it still feels solidly made, with a solid feeling shell and decent weight to it. The top is textured to look like brushed metal. On one side the projector has the power switch and some control buttons, on the back it has a mini HDMI port, 3.5mm audio out port and USB port and on the other side it has the charging port. Yes, that port on the back is a mini HDMI port, not a regular sized one, and an adapter is included. The projector does not have any built in wireless features, but it can power a chromecast or miracast dongle.

Sharp focus on this projector is easy to obtain. Everything is in focus from corner to corner, and so sharp that individual pixels are visible. Despite being low resolution, it is possible to read almost everything on screen as long as the resolution is set correctly. Action is smooth and there is good contrast despite in a dark room. It is disappointing that the projector balances colour so blue. It’ll be hard to see on its own, but put next to any other screen and the difference becomes immediately visible. As you can see in this comparison with another projector the difference is quite dramatic. The color balance is the largest reason for giving this projector a low score in the picture quality category. The projector is balanced blue because blue light has the appearance of being brighter. For video and movies it works fine, but for projectors I would look for something a bit brighter and higher resolution unless you will primarily be presenting in a pitch black room. 75 Lumens is not very bright and about the minimum I would recommend for one of these.

The projector has a fan that produces a high pitch buzz when it is running. If you’re wearing headphones the fan is not noticeable, but the little tiny built in speaker barely drowns it out at full volume and sitting next to the projector it can be quite annoying and difficult to ignore. I would recommend buying a cheap external speaker as it will significantly improve audio quality. The built-in speaker will really only be suitable in an emergency.

The focus on this projector works very well. A small turn of the focus wheel adjusts it in or out of focus, and when in focus the entire picture is clear and sharp. Even the edges maintain critical sharpness.

I got near the two hour claimed battery life with this projector. The nice thing is that there is always a clear indication of how much battery is remaining, so there is no need to worry about running out mid presentation. Also, it can run solely off of USB power, although it requires a steady 2A connection which most battery banks cannot provide.

Operation of the projector is simple. Flick the power switch on and switch to the mode needed. The mode works. I wish it defaulted to HDMI mode.

The little tripod included folds compact, and can stand about 8 inches tall.

In conclusion this projector has some nice things about it, mainly in its compact size and simplicity, but its picture is on the blue side and its fan is annoying. I would recommend spending $100 more money on something brighter, with better color and higher resolution, even if the trade off is size.