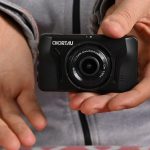 Check it out on Amazon

The Chortau B-T19 is an ultrabudget dashcam from an e-commerce brand Chortau. This camera is a great example of the old adage “too good to be true” in that the 1080p video quality and overall reliability are quite poor. Despite this, the camera frequently receives a “Recommended by Amazon” tag in search results or even Amazon Best Seller status due to its staggering number of reviews. In part, I suspect the positive reviews are due to the camera being made out of metal, so it does feel solid, and viewing it on a small screen makes the video look OK. But overall plate readability and colour rendition on my particular unit are awful. And for reliability and longevity, I suggest seeking other options, as another $20-30 can net a far more reliable camera depending on what’s on sale.

This camera is surprisingly robust feeling thanks to the body being metal. The buttons are clicky and the camera does feel “quality” due to its weight. This is an old tactic though the camera does stand out here while other budget manufacturers are making their cams out of relatively cheap feeling plastics, the metal build quality is notable. Unfortunately, for all the good that the metal build brings, it is pushed aside by the giant screen on the back of the camera. A big screen sounds great, but viewing angles on this thing are terrible and it is hard to see what’s going on unless you’re viewing straight on.

The user interface is a mess. The camera buttons are placed on both sides of the unit and require two hands to navigate. The buttons are, at least, clearly labelled but the layout is nonsensical. Why are the navigation keys on one side and the OK button on the other? Why does the up key go down in some menu options like setting date/time and up in others? It’s not helped by the TN display which has very poor viewing angles. Basically, good luck changing the camera settings from the drivers seat, if the cam is mounted on the passenger side.

In the sun, everything gets this weird syrupy yellow cast. Like a Mexico Filter in movies! The contrast is super high in the sun with dark spots becoming BLACK and bright spots becoming WHITE. This makes it hard to read plates even up close, as they’ll often be blown out and too bright.

In overcast colours, brightness and contrast are better handled. It doesn’t really make it easier to read license plates though as the resolution is overall very poor. Much closer to maybe real 720p.

It’s hard to see anything, and reading plates is pretty much impossible.

It’s Cheap for a Reason

The main warning is that cameras like these are almost worse than nothing. They lack overall reliability and longevity and often fail in a way that is not noticeable to the end user (some units mind you WILL last for years and others will pretend to record while really doing nothing). Positive reviews are gathered from users who often lack context after testing other cameras and are swayed by the metal build quality and the fact that it even turns on and records. With a cheap sensor, cheap processor, cheap circuit board and cheap battery, there are several very substantial potential points of failure that are all made with cheap components. Users will believe they are protected during an accident, but the reality may be that the camera has failed weeks or even months ago without them knowing. This is possible with any dashcam, but is more likely the more cheap components are used.

Don’t buy it. Don’t support brands that are simply rebranding generic products and may have used sketchy tactics to garner tons of positive reviews. Even though my recommended budget cams are almost double the price, it’s worth it to get a brand that is present in the dashcam community, responds to user feedback, offers some level of post purchase support and has overall substantially better video quality. Check out the Viofo A119 V3 instead.