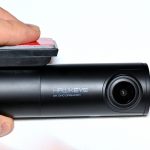 Near the end of 2019, more budget dual dashcams have popped up that can record higher than 1080p resolution with their front facing cameras. The Hawkeye Q3 Pro is the first example I have tested and the results speak for themselves: this camera has significantly easier license plate readability versus dual 1080p cameras. The Q3 Pro is an excellent example of a budget dual dashcam with decent forward facing video in day and night and an acceptable rear camera.

Editor’s Note: I am still unsure if this is the same Hawkeye who produces the Firefly series of action cameras.

The camera itself is a stealthy tube shape, made out of solid weighty plastic. It’s mounted by sticker to the windshield and two mounts are included in the box, although I wouldn’t really consider this camera easy to move between vehicles. You’ve got two cables to plug into the side, with a headphone jack looking plug for the rear camera and a micro USB for power. The camera uses a super capacitor so it should hold up well in hotter climates.

This simple tube shape means that the camera has few buttons: just a single Wi-Fi button on the side that toggles Wi-fi on and off with a cheery vocal prompt telling you [Wi-Fi is on!]. Install the camera using the app to line it up, set the date, set your plate stamp and then it’ll automatically start and stop recording when you turn on your car. Strangely, the rear camera has this red wire which is used to detect reversing but since this camera has no screen that feature is not present. Just cut it off or hide it. As for other features, the app includes a parking mode if you hardwire the cam along with turning the stamp on and off.

The app “Dashcam Player” itself is straightforward and works well on my Samsung S-series phone. It was stable the entire time I used it, with no freezing issues. It allows you to stop and start recording, flip between front and rear cameras and change the camera settings. The app includes basic settings for timezone, a simple time lapse parking mode, mic volume and GPS on/off settings. It is intuitive to use and presented better than many other dashcam apps I have tested. Take note: the camera’s default password is “88889999”. An iOS version of the app is available but I did not test it.

Front facing video quality is where this camera excels. By default it uses the H265 video codec which results in lots of detail, although the video seems to be at a fixed bitrate. It’s approximately 1GB per 6 minutes of driving. The camera also leaves 8GB of free space on the memory card, so for a 32GB card you’ll get just over 2 hours of driving before it starts to overwrite old footage

In short, this camera performs remarkably well in all lighting conditions. During the day under ideal conditions you can often read oncoming license plates two lanes over. That’s a huge step up over many dual 1080p cameras – with all of the dual 1080p cams I have tested it’s only possible to read plates immediately adjacent to the car.

I’ve got no complaints about the front facing camera, even in darker situations. It’s not as bright as some other cams however it tends to hold details a bit sharper and is overall more than adequate. After the sun sets, expect oncoming license plates to be a bit too blurry to read. If the car is stopped, or going the same speed as you then you should be able to see the license plate.

The rear camera is closer to a low end 1080p camera as it’s more similar in video quality to the B1W or the Xiaomi 70 Mai. Yes it is 1080p, but it tends to smooth details out. Look at the road for example: there’s only a small bit where you can see details on the pavement. With the front facing camera there is so much more to see in terms of pebbles, rocks and bumps. All that being said, the rear camera is serviceable during the day. It’s honestly good enough – just that front cam set such a high standard for video quality that the rear cam came as a shock because my expectations fell in the other direction. Any car that comes close enough behind you and you’ll be able to read the license plates.

There is one thing the rear cam excels at: under street lights at night. In the city, under street lights, the rear camera produces solid video, with that same smoothing that you see during the day eliminating the vast majority of image noise. When cars come up on behind at traffic lights I have no trouble reading plates. Out in the country, under pitch black, you see about as much as you could expect: close to nothing except headlight spots.

Tech spec wise, this camera is based on a HiSilicone chipset. The front sensor is an Omnivision Os04B10 and I have no idea what the rear sensor is.

You can get more info about this camera at CarCamStore (Thailand).

The Hawkeye Q3 Pro Dual Dash Camera sets a standard above dual 1080p cams for license plate readability that I suspect will only be beat by real 4K dashcams. The front facing video is excellent during the day and acceptable at night. The rear video is overall acceptable. Build quality is solid and the app functions well.