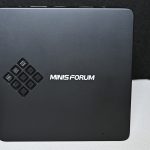 The Minis Forum is a full desktop PC in the palm of your hand (or close to it). It’s a low power PC overall and the best use cases for it are what you would expect of something in the budget category: streaming video, social media and even point-of-sale software, especially in use-cases where space is a premium. However, anything requiring lots of power such as gaming or video editing is best left to a full size computer.

The entire box is made out of black matte plastic and while it does not feel cheap, it is a little bit hollow. On the top there is the fan port, and all ports are on the sides. As with most mini PCs in this form factor the I/O is extensive: a full size SD card slot, 3 USB-3 ports, an HDMI, VGA, gigabit ethernet and a headphone jack.

Windows 10 is preinstalled so set up is very easy. Just plug in the power and video cables and turn it on. You’re greeted with normal Windows set up and all you need to do is select your options and install all the programs you want. While an HDMI cord is included in a box, you will need to supply your own mouse and keyboard.

Day to day stuff is snappy. Apps launch time is quick and web pages load fast. The one thing that concerned me about this computer was its eMMC storage, which is functionally a mid range SD card in terms of speed, but despite this clear bottle neck the experience was relatively zippy and smooth with things only slowing down when Windows decided to install updates. Also, if you are keen on faster speeds there is the ability to install an NGFF SSD drive by unscrewing the bottom four screws (pay attention to any antenna cables when you pull the back off).

As for other benchmarks: PC Mark 10, the computer scored 1,343 with a higher 3,636 score in essentials such as program launch time and web browsing, but was much lower at 981 for digital content creation. It goes to show what this computer is geared for primarily: watching online video, browsing Facebook or even running point of sale software. This computer is not meant for video editing or gaming.

On the note of gaming, this computer is below average. The older the game, the better chances it will run smoothly. Many modern AAA titles will outright fail to load or are just too large for the built in storage, while the best you can hope for is 30FPS at 720p low-medium for anything else. It is really hit or miss. What does work quite well is Steam in home streaming so combined with a more powerful desktop PC, you can use Steam to remotely access your game library.

Compared to the older Intel Atom based mini PCs it’s night and day. Webpages take nearly twice the amount of time to load with the Atom-Z8350 and as well, the Z8350 struggles to play 60FPS or 4K content. The GN34 with its Celeron J3455 played both those just fine.

This isn’t the first mini PC I have reviewed, but it is definitely more powerful than the others. I am always surprised how good mini PCs are getting at their budget price. I feel like this video was a learning exercise too in terms of filming screens, using OBS (I don’t stream) and that sort of thing. There is a lot I would change were I to do it again, but I need to be done with it so I can move onto other better things. Anyways, this PC is good at:

This PC is not good at:

So make what you will of it. I use a mini PC like this to save power when I’m just bumming around watching TV. The old one was getting slow with age, so hopefully one with an upgrade path, the eMMC to SSD storage, will provide more longevity.