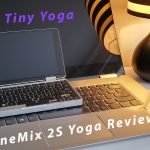 It’s hard to appreciate just how small this tiny 2-in-1 is; and that’s what makes it one of the coolest devices we have reviewed to date. This niche laptop will not be for everyone as it does have some flaws, but those who are interested in this type of device will not be disappointed if they buy it knowing its limitations. Relatively snappy performance, full Windows 10 and a folding pen/touch design are its highlights!

Author’s Note: Don’t buy the original One Netbook Yoga. It is based on an Atom processor with abysmal performance. Instead, buy either the One Mix 2 Yoga or 2S Yoga.

The build quality of this laptop is a mix of excellent and slightly less than excellent. The all metal body is solid and feels fairly substantial. The edges are almost too sharp and the hinge feels tight, almost too tight. There were a few scuffs on the metal out of the box, and one thing that really irked me: the hinge closes with a loud click of metal on glass. I am worried that the glass will crack as a result and so I put some little sticky rubber bits on the corners to cushion the screen. I suggested to One Netbook that they do something similar – my lenovo for example has a thin rubber line around the screen that cushions it against its metal frame. A penny worth of rubber stickers and this issue would be easily solved.

There were a few other missed opportunities with the design too: the screen could have been extended larger instead of these crazy huge side bezels. Or they could have stuck the speakers up here or even a webcam.

One opportunity this laptop did not miss was with port selection. While an additional full size USB port would have been appreciated, I do like that it has a micro HDMI out and a headphone jack. The USB-C port can do display out as well as support other dongles but most of the time it will be used to charge the device. The computer is picky about the type of charger it uses, supporting only some of the USB-C PD battery banks and chargers I tested it with. It also does not seem to charge at the same time as having dongles plugged in.

I also noticed that the Wi-Fi signal tends to drop a bit quicker than other devices in my house. I suspect that the antenna is stuck under the keyboard like the speaker, so the Wi-Fi is a bit more distance limited. When in Wi-Fi range, speed is excellent however, easily maxing out my 250mbit connection.

The tiny 1080p display on this laptop is sharp, fairly colour accurate but only moderately bright. It’s nowhere near as bright as a modern smartphone but it is enough that you’ll be able to work outside, so long as it is not in direct sunlight. Putting it beside my full size laptop are around the same brightness, which puts it at approximately 300 nits. Unfortunately it does use pulse width modulation to dim the backlight. You won’t see the flickering in person but it is definitely visible on camera. My biggest gripe with the display is not the PWM, and not the limited brightness, but  the backlight bleed. The left edge of my screen is noticeably brighter than the rest of the display, and on dark screens there’s some other uniformity issues. This feels like the kind of IPS screen I would find on a $100 tablet instead of a premium niche device, and it’s a shame because the screen is one of those things you’ll be staring at the most.

Thankfully the touch and pen input and pen is relatively accurate. The pen input is from a company called GooDix who makes pen displays for Huion and other Wacom clones. The pen experience, too, is decent but not great. For writing notes and basic input you’ll be more than fine but the pressure curve is too tight for drawing and sketching. What I mean by that it is too easy to go from a light brush stroke to full pressure. It just means that thing will perform best when accuracy is not the most important. So for example, dodging and burning parts of pictures, or touching up blemishes or even rough digital painting, that’s great, but hard comic line art can be a bit tough to get right. I’ll do an in depth look at the pen and drawing in a later video since I could spend 15 minutes doing demonstration or talking about it right now, just artists keep in mind this device may not be for you unless it gets a driver update to fix the pressure curve.

Performance is where this thing hits a home run. Featuring a dual core M3-8100y processor, this mini laptop has similar specifications to some entry level surface tablets. That means day to day tasks are handled with ease. Everything from Netflix, to word processing, to browsing the web while listening to Spotify is snappy and feels fast. At no time did I notice slowdowns or stuttering or lag, even as I got into more intense stuff like unzipping files. The fan powers up and does get very loud but this thing keeps zipping along like it was meant to be.

One place where performance flops however is on the SD card reader. Whatever specification they are using for this card reader does not take advantage of UHS-3 speeds, meaning my cards are maxed at about 20 Megabyte per second write and 30 read. The read and write speeds I was getting are fast enough for watching movies or running basic apps off a card, but even a cheap usb-3 card reader will do better.

Typing on a tiny keyboard isn’t all that bad! It takes a little while to get used to how much smaller it is and some of the button layout decisions are a bit strange to say the least, however after a couple days of practice I can consistently ace typing tests at 60 words per minute compared to my usual 90. Honestly though the feel of the keyboard is a bit mushy and heavy for my tastes. I don’t hate it but I am very aware after using the Surface Pro keyboard and my laptop keyboard that it is possible to have a significantly better feeling keyboard with such limited travel.

It is a bit easier to type with this laptop with four fingers instead of five due to the small size. It took me a little longer to type out this script than it would have on my normal computer but that is something that would improve with time and practice. Most of the extra time I found was hunting for symbol buttons or after mis-clicking on the tiny comma, period and slash button. I wish those buttons were full sized and the semi-colon and slash were the smaller ones but people who code often may disagree with me. I think I use the period and comma a lot more, which makes a full size button for those a necessity.. Like I said, some strange decisions on this keyboard could have been changed around.

This little laptop has a tiny optical nub instead of a touchpad. I was skeptical at first – after a small adjustment period it is really not that bad to use (see how this is a common theme here?). I find that I use a mix of the optical nub and touch screen to navigate and it almost feels natural. Almost. It definitely will not replace a proper touch pad but it does suffice and can even be modestly accurate. It’s better than the touchpad on my old HP.

OneMix states something like 12 hours but that claim is a bit crazy. The only time I got anywhere near 12 hours of battery was with the screen brightness low, while writing this document. I think they must have deliberately tested this laptop in a use case like this so they could say the longest battery life without lying. However I expect actual battery life to be closer from 4 to 6 hours when streaming video or doing things that require a bit more heavy lifting. Even less when gaming.

As I mentioned at the start of the review, the speakers are probably my least favorite part of this device. So much potential is lost here. The speakers are not front firing, they’re not downwards firing, there isn’t even a speaker grill! Sound just kind of floats lifelessly up through the keyboard, and if you turn the volume up too high the sound gets fuzzy thanks to something in the laptop vibrating. They will get you by in a pinch, but even a modern cell phone speaker is better quality and they fit those things into a smaller space, so One Notebook really needs to fix this one for its next revision.

One final note: No AAAA battery is included with the pen. Make sure to add one to your purchase if you want to use the pen right away.

My job as a reviewer is to point out what I like and do not like about a device, and it is up to you, the viewer, to ask yourself the question: can I live with these issues? Will I get enough out of this device that I can put up with the problems? No device is going to be perfect, and the One Netbook is definitely not the exception. It comes from a company who is relatively new to making computers, and their inexperience shows in a couple places, like the lack of padding on the screen. I wish that they had decided to go with a better panel for the display, and that they had positioned the speakers somewhere better as well, but here’s the thing. Currently, this is one of the only pocket sized laptops that is a full 2-in-1 with pen input. Yes, it’s expensive for what you’re getting. Some of the hardware choices are questionable. But at the same time it’s cool as hell and kind of a bragging right to own it. Our support as tech enthusiasts is what helps these companies grow. Maybe they’ll watch my video and get some suggestions for how to build the next one better, then become a more popular and well known brand like GPD. Or maybe in 6 months they’ll entirely disappear and anyone who purchased these will be left in the dark and these things will become rare. Either way, I love that there are niche companies pushing innovation with unusual designs, and if you have made it this far and still decided the device is for you despite the flaws, I think you’ll really like what you are getting.

6 thoughts on “One Netbook One Mix 2S Yoga Review – A Tiny, Expensive Wonder”