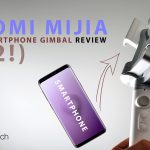 Xiaomi Mijia is a renown brand for budget, high quality electronics. So how does the Mijia gimbal stabiliser hold up? Well, turns out it does a pretty decent job, despite the app being a little simplistic. If you’re the kind of individual who films a lot of handheld footage with a smartphone, then a handheld smartphone gimbal is for you, and there’s honestly little reason to spend more money.

This handheld smartphone gimbal is made from plastic, but that does not make it feel cheap. The plastic is rubberised, giving the gimbal a grippy texture that is pleasant to hold, and it has a decent weight to it that makes it feel substantial in the hand. None of the accents are metal, despite being shiny. The only metal on this gimbal is the screw that tightens the rotation.

The Samsung S9 (not S9+) fits in this gimbal quite well, however, phones larger than 6-inches like the Samsung Note 9 may have trouble balancing, especially if they are the older 16:9 aspect ratio.

The gimbal has a customisable trigger button on the rear (use the app to customise it), as well as buttons on the front to start and stop recording, and a 4-way joystick to control gimbal direction. Since it is only 4-way, the gimbal can only pan or tilt at one fixed speed, not do both at the same time.

There are no accessories included with the stabiliser. All that comes in the box is the gimbal itself and a USB charging cable. Battery life itself is excellent. It lasted more than a days worth of shooting for the video (4+ hours), so should be good for more than the battery life on most smartphones.

Quality of image stabilisation is very good. This gimbal smooths out most bigger bumps and jolts, and is very powerful when combined with built in optical image stabilisation from the phone. Whether riding a bike or walking or jogging, everything filmed with the phone looks hyper smooth. It occasionally misses some micro stuttering but as mentioned, that gets covered up by the phone’s built in stabilisation.

There is a fixed horizon mode, or a tilt mode where the camera follows the direction you point it. If the gimbal is bumped too hard or is blocked, the motors will go into safety shutdown until the trigger button is pressed twice.

It is also possible to mount an action cam, however, the action cam screen will not be visible when it is mounted.

The app is very basic and does not take advantage of all of the phones built in features: for example, it cannot use the phone’s built in stabilisation. Unfortunately, the app is the only way to take advantage of the start/stop recording buttons, and zoom trigger on the gimbal. Those functions do not seem to work with Samsung’s own built in camera app.

Thankfully while the filming features of the app are pretty limited, it does have quite a few customisation options for the gimbal itself. It is possible to change the pan/tilt speed, set up the custom function button and change the mode of the gimbal.

The Mijia Gimbal is a decent cheap smartphone gimbal, with sturdy build quality, good overall stabilisation, and a fairly basic app. It would be nice if the gimbal buttons worked in Samsung’s own camera app though.