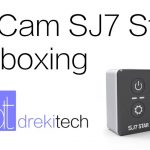 The SJ7 Star comes with a whole host of accessories, all of decent quality. Accessories between action cams are fairly standard so we’re going to fast forward through this section: note that the important basics are included, sticky mounts, handlebar mounts, and right-angle adapters.

This camera is available on both Amazon USA and Amazon Canada. If you are ok with importing for yourself, Gearbest has this cam cheaper. Check it out here.

In terms of build quality, this is one of the nicer cameras I have handled. The two colour metal plates make the camera feel solid and look handsome. Opening and closing the battery door is tight, and even the waterproof case feels sturdier than most other cameras. The design and build of the camera is where the SJ7 Star stands out the most as it feels like a far more premium product than other sub $150 action cams… other than the Mijia which has a very similar premium feel. That alone may be enough to justify the significantly higher price tags over the Firefly, ThiEYE and Eken, but it might not be enough for everyone. Those cameras are still pretty solid but since they are all plastic and it just feels cheap in comparison.

The touch screen of the SJ7 is responsive and the user interface refined. Tap for menu, swipe left to change modes and swipe down for playback. The menus are easy to navigate, and I like how the camera has both buttons and touch for navigation, which makes it easier to switch modes and settings when you’re wearing gloves.

Daytime video is on par with other budget real 4K cameras. I can’t honestly say that the SJ7 Star stands out from the other real 4K cams in any meaningful way: colour balance is largely the same, exposure is pretty similar, lens flare is well managed and there is lots of detail. I found that my copy of the SJ7 tended to overexpose a little bit, but now that there is an exposure value adjustment I have been able to tweak the camera to my personal preference. Video from the camera is good or excellent depending on the situation, and what I have come to expect from a camera in this price range. The best format that this camera offers, in my opinion, is 1080p 60 because it has stabilization, but it also has 1080p at 120 frames per section, 2.7k at 60 frames per second and real 4K at 30 fps if any of those suit you more. All of the modes I tested had lots of detail in good light at the default settings.

Low light video from this action cam is, again, on par with others in its price range. The camera is a daylight shooter primarily as after the sun sets and it starts to get dark, detail becomes smudged and eventually nonexistent. Indoors, in good artificial light it is fine too, but when the light is dim and moody expect your video to be the dimmer. In order to understand when this camera works best, imagine yourself wearing fairly dark sunglasses. At the point of sunset where you need to take them off is about the cut-off for this cameras filming ability. Thankfully, a few months back SJCam added an auto low light mode, so you have the option to prioritize frame rate or brightness.

Audio is, unfortunately, the SJ7’s weakest link. It’s not that the audio is terrible, but side by side with competing cameras like the ThiEYE T5e, it sounds muffled and muddy. Voices are not as clear and bass is overemphasized. Here’s an example: […] I’m not sure if this has been fixed in a more recent hardware revision because I do have one of the earlier cameras, but at the very least the camera does accept an external mic if you’re unhappy with the audio.

The SJ7 Star features an electronic gyro stabilization in 1080p 60 or 30 mode, and has very good results. I have yet to use another budget cam that stabilizes the vibration of my quadcopter as smoothly as this one (except perhaps the SJ6 Legend Air). The stabilization works well for bigger bumps and jostles too, and the lens correction is accurate so there is little distortion at the corners. The 8S and the SJ7 are close competitors on the handlebar of my bike, and again there is little meaningful difference between the two, some of you may prefer the video from the 8S and some may prefer the SJ7.

Still photos from the SJ7 are similar to its competitors that have the real 12MP IMX117 sensor: that is to say they have a true 12MP resolution and are not upscaled. The end result is some of the better action cam photos. In good lighting they have lots of resolution but in poor lighting they get blurry fairly easily. Just like for video, this camera’s forte is daylight shooting.

So in the end, it seems to me like the biggest difference between the SJ7 star is in terms of user interface and build quality. But really, beyond that, not much stands out from the other real 4K cams in its price range. I can’t find any major fault with the SJ7, but nor can I find any other big reason to recommend it over competitors. I have a long history shooting with this camera and I’ve seen it grow from a buggy firmware mess into a solid, refined product, and I can give major koodos to SJcam for standing behind their gear with regular firmware updates. If you find build quality important and you like timely updates, then get this camera over some of the cheaper options. If you can live with a plastic body and a less refined UI, the Thieye T5e is a fine cam too, and there’s also the Firefly 8S which strikes a decent balance between all three.

I do recommend watching the real 4K comparison video between the Firefly 8s, the SJ7 Star, the ThiEYE t5e and the Mijia to get an idea of what camera will work best for you.