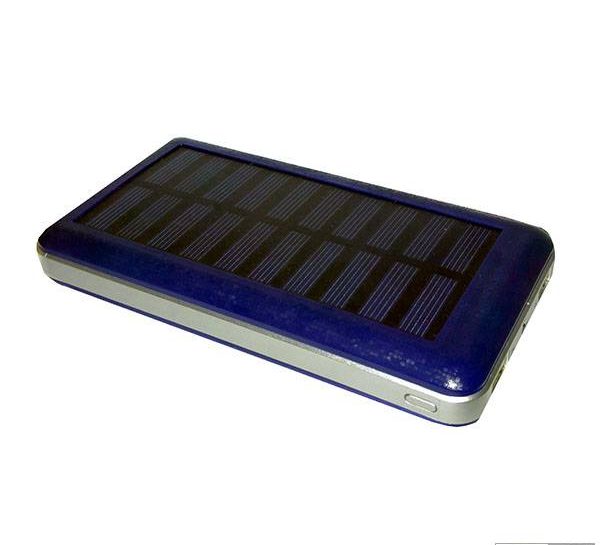 Summary: While it’s nice to have the solar panel as a last-resort type backup, it does not do much, so consider this product as its value as a regular charger before purchasing. When left on my window sill for days in direct sunlight, I was only able to get this charger up to about 25%. This is better than nothing, but solar will not be your primary charging source with this battery.

This charger looks cheap due to its sparkly plastic edges and faux metal trim. When put side by side with another brand made from metal, the difference in appearance is obvious. I appreciate that the plastic is matte so it does not pick up fingerprints, but when I drum my fingers on it, the plastic feels and sounds hollow. Despite this hollow feel the charger is fairly heavy. In terms of build quality, I tried to pull the charger apart with a knife to verify that the cells inside were the stated capacity, but I could not, so the build is reasonable at least. It isn’t going to fall apart, but it looks cheap.

In terms of actual performance, the charger does fine for speed, but its efficiency isn’t very high. I mentioned earlier I tried to pull apart the charger to see the cells inside, and I did this because I am not certain this charger is actually 20,000 mAh. These types of batteries are usually around 85% efficient, and that means I should get 5.5 phone charges from full to empty. However I found that I was only able to less than 4. I tested this battery from empty with another 20,000 mAh charger I had lying around, and the other charger went from 98% to 10% before the Aedon charger read as full, so either the Aedon is less efficient or lower actual capacity than my other charger. This is the largest reason why I gave the charger 3-stars.

The solar on this charger is a bit of a gimmick. I left the empty charger out in the sun for a few days and it only managed to net 25%. In an emergency situation this would be a nice feature to have,  but it will not replace a proper solar panel charger for backpackers or hikers.

Only one of the 2 USB ports is 2A capable.

I find it slightly problematic that my other 20,000 mAh charger was able to fill this one up all the way and still have some charge left to top off my phone. Whether that’s due to efficiency differences or a lesser capacity will be up to further testing and verification. In the meantime I’ve given this product 3-stars, because despite the questionable capacity the charging works fine. Note that the solar is only useful in emergency purposes and not as a main charging source.