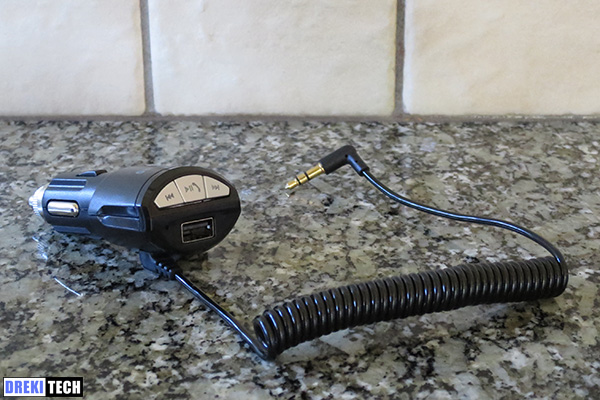 This Bluetooth device was a pleasant surprise. The high quality audio and compact design definitely stood out when surrounded by competitors who have too many wires. But the built in non replaceable AUX cable is a deal breaker for me.

The initial build quality of the device surprised me: it is solid plastic and feels firm in my grip. It is better than the usual generic product. That being said, the buttons are a little bit mushy and the cable definitely isn’t heavy duty. This leaves me a little concerned about the cable breaking, as it is built in and there is no way to remove or replace it. This is one of the biggest issues with the device: if the direction the cable sticks out isn’t right, there is no way to spin it and if the cable breaks, there will be no way to replace it without opening the device up and soldering in a new connection. I find myself wishing I could replace it with a shorter, non-coiled cable so I could hide it easier.

I personally find the button placement of the device perfect: as my AUX and lighter jack are on the dashboard, it sits in just the right spot. That being said, this device may not be the best choice for everyone. If your AUX port is in the glove compartment or center console it kind of defeats the purpose of having an adapter with next/previous track buttons on it.

It’s also a little unfortunate that it can’t be used outside of the car since it requires being plugged into a lighter jack (although some work-duty stereos have the lighter jack port).

Music from this device is about the peak that Bluetooth can do with the A2DP protocol. I was pleasantly surprised to find that my music retained nearly all bass and treble with minimal distortion.

Call quality is OK, so long as your car isn’t loud. Unfortunately since the lighter jack is so far away I practically have to yell to be heard when driving on the highway. When parked, I could talk at a normal volume and be understood. Incoming voice sounded exactly like Bluetooth should. For some reason Bluetooth call quality hasn’t improved since the early 2000’s so it is already set up to sound terrible. If you have a serious call, I’d recommend pulling over and talking on your handset.

One thing that was surprising was the near lack of background buzz. I tested it on a few different vehicles and not once did I have any audible hum while driving. This may not be the case for every vehicle, but none of the vehicles I tested it in required a Ground Loop Noise Isolater to get rid of the hum.

The Bluetooth wireless had no difficulties pairing and unpairing. I found an odd annoyance though: for the first 2 minutes or so after connecting my phone, music would skip occasionally. It always seemed to go away after driving and I did not have this issue with my friends phone so I believe it was a problem with the specific device. Other than that, the signal has been strong and steady.

The charging performance was average. I don’t have any 2.1 AMP devices so I could not measure if it made it that high, but it did charge a regular 1 AMP phone at full speed.

This Bluetooth device was a pleasant surprise. The high quality audio and compact design definitely stood out when surrounded by competitors who have too many wires. But the built in non replaceable AUX cable is a deal breaker for me.