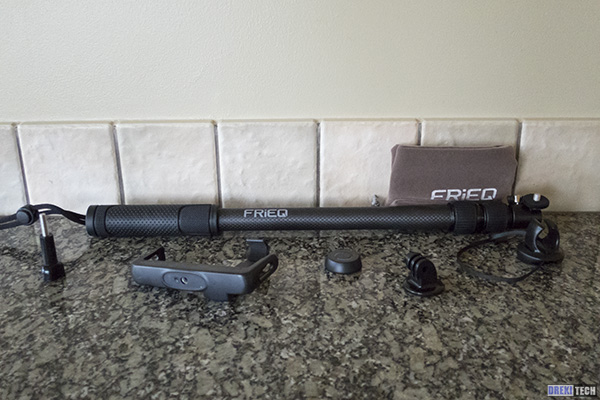 As far as selfie sticks go, the FRiEQ Carbon Fiber selfie stick is a class act. The stylish chassis and telescopic arm make the product appear professional. However the Bluetooth shutter release battery came dead and there are no instructions included as to how to use it.

Right out of the box I could tell this is a quality product. It has absolutely no flex and I have tried it with mobile phones and bigger point and shoot cameras. That being said, I wouldn’t risk my DSLR with it – nor was it made to take a DSLR.

Each of the telescoping arms moves smooth and the levers hold the camera in place quite well. All of the mounts are decently made from plastic and grip the phones tight. One thing I noticed is that the phone mount had a hole where the top-mounted power button for my phone was. This was a nice touch as otherwise the mount would’ve blocked access to my phones power button.

Due to the high quality build, it is a tad more bulky than other selfie sticks. I didn’t tend to find this an issue when I was carrying a backpack but this selfie stick isn’t just a pocket and go item. And while it is made out of carbon fiber, with a bigger device on the end it does get quite heavy and I found myself holding it with two hands for comfort.

This selfie stick doesn’t skimp on the mounts: the default ball head connects to digital cameras and there are 2 other screw in mounts. One for GoPro and one for smartphones. It seems to fit most smart phones and smaller phablets, but I wouldn’t bank on it fitting many phones beyond the 6″ range.

It also includes a Bluetooth button remote which has been the biggest issue for me. The remote is a simple thing with no on/off switch and takes awful CR2025 batteries. The battery included was dead out of the box but after I managed to scrounge up another the button worked fine. I am concerned about battery life and these expensive watch cells. What I would liked to have seen was a USB rechargeable shutter release or at the very least an on/off switch.

This product is a stark contrast from the inexpensive selfie sticks I have seen floating around everywhere. Its build quality combined with the mounts it includes make it a great option for someone who wants a professional piece of equipment. The only thing that would make it better is a USB-rechargeable Bluetooth button.