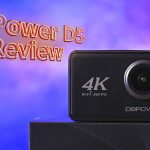 Author’s Note: The D5 Amazon listing links to a “Newer Version” camera. This is misleading! The linked N6 is actually based on older Fake 4K hardware. We have not tested the N6, however, based on past experience the video and audio quality will likely be worse.

The DBPower D5 is the cheapest action cam I have ever reviewed. I picked it up for a whopping $23 on Amazon on sale (and at time of publishing it is less)! Despite skepticism, it does real 4K and appears to be a clone of the MGCool Explorer 3, with overall similar, if slightly lower video quality. But for under $30 who cares! The fact that this camera does real 4K at that price is astounding.

Now, glowing introduction aside, you do have to keep in mind that this is a cheap camera and it has a few small quirks. Near everything about it is quite good but nothing is perfect. However you will struggle to find anything else under $70 that is comparable. And for most people just getting started with action cameras I think this will be more than good enough.

The D5 comes packed with a small kit of accessories and mounts. I appreciate how they are not packaged in little plastic baggies and wish more action cam makers did this. Notably, the kit includes two batteries and a remote.

Build quality wise the D5 feels way nicer than it should for the price. It is solid, none of that hollow feeling that many other budget cams have. The battery door slides smoothly and the buttons feel nice to press. As with most budget action cams, it is not waterproof without using the external case. It definitely is more like a $100 cam, and looks strikingly similar to the Akaso V50 Pro. I would not be surprised if they are based on the same internal sensor and processor and that cam costs closer to $120. They even use the same antiquated mini-USB cable for charging. Better pick up some usb-c to mini USB adapters so you do not have to carry a wad of extra cables just to charge the camera.

On the top of the cam are two control buttons, which are psychologically backwards for me. The outer one does power and mode switching and the inner one does recording. Basic UI things can be navigated with these two buttons but more advanced settings must be changed using touch. There are tons of settings including important ones like mic volume, however there are only 3 resolutions. 4K30, 1080p60 and 720p120.

Here is where we run into a big quirk: the cameras user interface is rather confusing to navigate. It starts with little pop out menus on the sides or bottom of the camera, which are fine for things like mode switching or turning wifi on/off, but in order to access settings you need to pop out this right menu, tap settings, and then you are presented with a sub menus that look so similar from the top menu it is difficult to know whether you are in settings or mode switch. There is also no smooth scrolling in lists. One page at a time can be scrolled by flicking. When you want to back out of the menu just tap this top arrow but then there is no way to go further back without using the physical buttons. I guess you can get used to it, but it is definitely not super intuitive.

There are a few bugs too: playing back video causes the camera to freeze. The only way to unfreeze it is to pull the battery. Also, for some reason I seem to be unable to format my card with the camera. It says it does it but when I checked on my computer all my old files were still there. Thankfully it is not too picky about memory cards and takes one formatted by the computer.

When reviewing these cheap cameras, I always ask myself: what is the catch? Normally on budget cameras there are issues such as 4K video is not actually 4K, or the audio quality is poor, or something like that which makes it hard to recommend the camera. But with the D5, well, the 4K video is real 4K. It has image stabilization at 4K. Audio sounds fine. Pictures have a decent amount of detail.

None of these things are going to be professional level mind you. The 4K video is not as detailed as the Akaso V50 X, nor is the stabilization as good. The audio is not as clear as the Vantop Moment 6S. But here’s the thing: does all that really matter? I think, for the vast majority of consumers, saving $60 or more will outweigh any of these small issues which, for the most part, will not even be noticed unless the camera is side by side with another cam. The 4K is good enough. The image stabilization is good enough. The audio quality is good enough. And this observation is comparing the D5 to cameras that cost $100 or $150.

When comparing it to $50 cameras, let alone $40 or $30 cameras, it blows everything away. The D5 is the kind of camera I could see many average users buying and being happy with even if it does not have top performance in any area. Everything is does is good, and at times even great. If I were a pre teen who only had pocket money from mowing neighbor’s lawns, then I would love to buy this and make fun of all my friends who spent hundreds on GoPros. That is a huge potential savings to someone younger if all they are looking for is a functional camera. I could see it being the camera I buy for my sisters 6 year old who wants to be like his parents using a GoPro but I cannot justify spending a lot of money on the camera in case he breaks it. Heck, this camera is good enough that I could see buying one for all my family members who have been thinking about buying a GoPro but never wanted to put money to it.

When it comes to night and low light the camera is decidedly average. With image stabilization turned on, the camera locks itself to 1/30sec shutter speed to try and prevent blur but that makes things too dark. Turn off EIS and everything gets a bit brighter, but only a bit. It was a particularly bright night out thanks to the full moon and all I could see were the bright parts of the street lights. Even inside my garage, which is well lit for a garage, detail is smudgy and shadows are too dark. For the most part I am able to tell what is going on at night, just that details are smudged into noise reduction. Basically, this camera likes a lot of light, the brighter the better.

With audio quality, it is loud and mostly clear, although at times it can be a bit too loud. Thankfully there is a setting to turn down the mic sensitivity. Talking too close to the camera will cause peaking and fuzziness. As with most action cams, audio while inside the waterproof case is not great. This camera stands out from cheaper cameras as buried in its menu is the ability to adjust mic volume which will help fine tune the mic to certain scenarios.

Still photos are pretty decent overall. There is an acceptable level of detail during the day and colours are fairly accurate. There is overall a METRIC TON of distortion thanks to that ultra wide lens though.

That transitions into the biggest issue with this camera which is battery life. I would expect to get under an hour of filming at 4K, closer to 45 minutes. Two batteries are included in the box, but a charger is not included meaning that batteries need to be charged inside of the camera. I’ve linked a set of spare batteries and a charger in the description but that battery and charger kit costs nearly as much as the camera itself. You are almost better off to buy two of these cams and just use one for charging. What a waste it would be environmentally, but financially it is crazy that even makes sense.

Buy it on Amazon here. Get spare batteries at this link. (Akaso V50 Pro compatible will work)

That sort of brings me to the crux of this camera: why is it so cheap? When the camera was released, it appears to have had a price of around $70. While that is still a pretty decent price for what you get, things are a little fuzzier with recommendations at that price because there is the Apeman Trawo or Seabird action cam which are both very good. I have a feeling this is old stock on Amazon, and Amazon starts to charge storage fees for stock that has sat around for a long time. So that incentivizes sellers to move product. Likely the sellers are losing money on this item so they are trying to get rid of them.

If you are looking at this camera, versus most cams in the $100 range, there are a few reasons to spend more. The reasons I think you would need to upgrade are for the stronger EIS, as I mentioned on the V50 X, or for true 4K 60 on the SJ8 Pro. While these are priorities for some, I personally find myself doing stabilization in post production and 4K 60 is something I rarely use. And the stabilization does work well enough even if it is more on the basic side of things. In these shots I am riding with the camera mounted to my handle bars and it does correct most bumps… although in order to properly perform image stabilisation, lens distortion needs to be mapped, and it is clear that there are some errors in mapping. For example around the edges of the frame I notice a bit of wonkiness and sometimes the center can shake a little bit too. And then, in shakier situations, such as walking with the camera, it definitely does not hold a candle to higher end cameras. This is all pretty average for the lower end budget cameras.

My recommendation, if you are looking for an action cam, the cheapest of the cheap, this is a very good bet. Yeah it’s not perfect, but if don’t have any premium action cams on hand to compare this to, you will be more than happy with its performance. And likely if you do have other cheap cameras you will be blown away by how good it does for the price