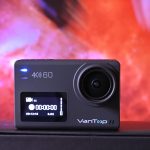 The Vantop Moment 6S positions itself price wise between true budget cams and the high end. The 6S has great build quality, very respectable video and good audio from the internal mic and should be more than enough camera for those who want something premium but do not want to pay as much.

Inside the box you will find a whole host of mounts, a full accessory kit to get you started. Along with stickers, you get a handlebar mount, two batteries, an external mic, and this snazzy remote watch.

This camera is very solidly built and feels premium with a solid weighty build. The grippy rubberized texture makes it easy to hold without slipping around and the whole package is put together quite sturdy. The weight and solid feel gives confidence that the camera will last.

User interface is almost entirely touch based. On the side of the camera there is the power button which also acts as mode switch, but adjusting any settings require using the touch screen or the phone app. The settings are broken into three main sections: one menu is entirely dedicated to video/photo resolution, the second has relevant adjustments for the mode such white balance, ISO, mic volume and distortion correction and then a separate section for camera settings like screen brightness and date/time. It is overall pretty easy to understand after getting used to where everything is. Occasionally it feels like the touch screen is not sensitive enough, and required to press a little bit harder to avoid missed touches.

The Moment 6S processes video during the day pushed a little towards warmer white balance with rich colour and a medium level of contrast, making things overall a little bit brighter and more vibrant by default than many other action cameras. While there is white balance, EV and ISO adjustment, there is no flat colour mode offered by this camera. That being said, even without a Protune-type mode, due to the camera having a higher end sensor there is still a lot more wiggle room to edit colour in post production than cheaper budget action cameras. For best results, set this camera to -1/3 or -2/3 EV so that some areas are not too bright and then adjust colour in post production.

The only formats this camera films that have stabilization are 4K30 and 1080p60 but these are some of the most common resolutions anyways. It can also film at true 4K 60 without stabilization, and a whole ton of other high frame rate modes such as 1080p 120, 720p 240, 2K and 1440p resolutions. In every resolution video is refined with lots of detail and consistently pleasing processing. There is also a ton of detail in all formats tested, with 4K of course being the best, however 1080p60 is no slouch either and looks far more detailed than 1080p on most cheaper budget cameras. Even the distortion correction feature works with EIS turned on at the same time. EIS works pretty well although it is not as aggressive as some cameras like the Campark V30 or Akaso V50 X. It strikes a good middle ground between removing most bumps and still allowing for smooth turns and cornering. When riding on a smooth road the camera is steady with few bumps, but when the camera is mounted to a poorly fitted half helmet you can definitely see more shaking. A gimbal is needed for perfect smoothness, or just edit out any extra shaking in post production. The EIS catches most of it.

4K 60 however has one issue with the audio. After filming 4K 60 for about 10 seconds the audio jumps out of sync. This can be corrected in post but it is time consuming to re-sync and will never look perfect.

Night and low light show off how good this camera sensor is compared to cheaper options. Under street lights there is a decent amount of noise but it is not ugly and the anti noise processing does a good job of retaining detail. Even the image stabilization manages to keep things from getting too blurry, although for best results leave it off and have the camera mounted on something steady. In the night riding shots shown below, in nearly pitch black the camera still manages to retain detail right to the edge of the bright spots from the street lights. Overall low light video is well managed and in general the camera should capture something usable out of it even if there is a bit of noise.

The internal microphone from this camera is quite good. Adjusting the mic gain in camera allows to compensate for loud or quiet moments. Most narration or vlogging is best done at 7 or 8 with the camera outside of its waterproof case and the louder volumes like 9 or 10 are to compensate for the camera being sealed up. Voices are loud, clear and easy to understand.

Audio also has a synchronization issue at 4K 60. After about 10 seconds the audio goes out of sync.

The external mic has the same issue with wind except it is even worse. There appears to be some sort of wind-cut filter applied by default (that cannot be turned off) so when it is windy the audio starts to skip and stutter. Again, keeping the mic out of the wind helps, but doing anything that involves higher speeds with the external mic means that the audio will not be usable and often better results are achieved using the built in mic.

Still photos are class leading with lots of detail, vibrant colours, and lots of sharpness. They also appear to be slightly more neutral and less warm/yellow colour than the video is. The stills do a good job managing contrast. Even in bright sunny scenes pointing near directly into the sun the colour is still vivid and it is possible to see detail in shadows. Take it into low light and with a steady hand (or tripod) it is possible to capture some remarkably good long exposure pics.

The Moment 6S can be found on Vantop’s Official Site.

The Vantop Moment 6S has successfully became the main camera in my kit because of its great video quality and decent internal mic. It strikes a good balance between cost and performance for someone who wants a higher end camera but does not want to pay as much as other brands cost. There is lots to love about this camera and it is definitely worth consideration.