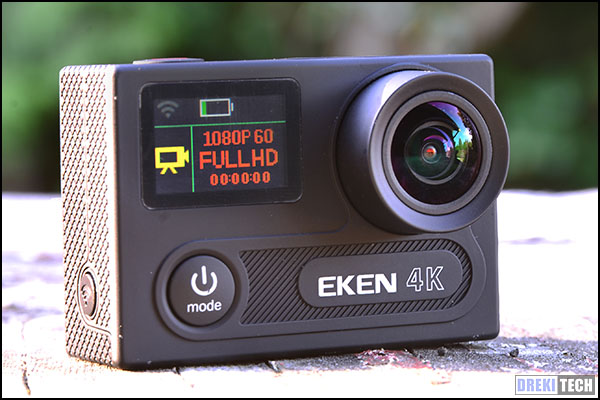 Conclusion:  The Eken H8r misses the mark due to blotchy video and the fact that it is not truly 4K capable and hardly even 2k capable. Were it advertised as a 1080p camera it would be acceptable: not the best camera I’ve ever used but far from the worst. It has solid build quality is and surprisingly good still images. It’s just too bad about all the problems with the video.

This is a review of the Eken H8r. Eken claims that this is a 4K camera, but I want to make it clear that the highest usable resolution is actually 1080p60. Overall that is the camera’s fatal flaw – were it advertised as a 1080p camera it would actually be alright, but because it is falsely advertised as 4K capable I can’t recommend buying it.

The Eken’s body is a plastic shell that is a little more solid than other cameras I’ve tested. The buttons have a nice click to them and the screen is bright. As well, the battery door is a little bit easier to open. On the negative side, the battery included with this camera is proprietary so it will not fit most of the 3rd party batteries for sale on the market today. Thankfully, there is a second battery and a charger included with the package.

The user interface is basic and there’s not many options for video customisation. The camera is really what you see is what you get. It takes way too many clicks in my opinion to switch from video mode to settings and back to video mode.

In terms of video quality, results are not so good. This camera is definitely not 4K capable, and not even 2K. These resolutions are recorded in a JPG codec. It results in jittery, jarring video and skewed colors, especially in the sky. The only usable resolution is 1080p. For 1080p it does an OK job. Colors are solid and the frame rate is smooth, but due to the way it down-samples a lot of detail is lost and the sharpness is way too high. This is the result of a low end processor that has not been optimised for the sensor. You can really see the difference when compared directly to my control camera, the Gitup Git2 pro. The Gitup has better colour and the detail is a lot smoother when riding down this trail. I took the H8R on a bike trip with me and while the 1080p video is not bad, when watching it later I was constantly aware that I would have gotten better video with another device and that’s aside from camera lacking gyro stabilisation. I don’t feel like the camera ruined my vacation photos and videos, they just could have been better. I would not recommend this camera as a dash cam either, as it gets very hot when recording – doubly so when exposed to the sun.

Photo quality is surprisingly good. Compared to other IMX078 cameras, it has a good amount of detail and little smudging. It made me realise what this camera could truly be capable of if the 1080p is optimised – and makes it all the more disappointing that it is not. Color is accurate, details are sharp and images look good overall. The one thing worth noting is that for some strange reason the camera only does ‘wide’ images which are a 16:9 ratio crop into the sensor. That means the real resolution of the still images are only 9MP and a lot of information that could be there is missed.

In terms of other things the camera does, the 360-degree VR video, it’s a bit silly. I didn’t really use it because it is some strange 1440×1440 crop. The waterproof case held up fine while swimming but I would not trust it diving as the seal doesn’t seem perfect and there is no lock on the latch.

When compared to the SooCoo C30, it quickly becomes clear that the video lacks detail. In such a low resolution on Youtube it’ll be hard to tell, but diving in deeper the problem becomes clear. Things like street signs and license plates are difficult to read, while details look smudged overall. At night, the video just doesn’t hold up. It’s darker and dull. The shaking is also much more apparent on the H8r because it doesn’t have a gyro.

Revisiting the footage comparing the H8r and the Git2 Pro from earlier, the difference is even farther apart. I was able to set a custom white balance for this scene with the Git2, which resulted in far more accurate colors. As well, still images look better and the user interface is less cluttered. The Git2 is still my go-to camera, and out of all those I’ve tested to date it remains my favourite, and it can be had for only a few dollars more if you shop around.

Overall, this camera does work fine in 1080p, but there’s better options on the market that offer real 2K at this price range. Currently it is not possible to get real 4K for under $200, so don’t fall for this marketing scam. Thanks for watching.