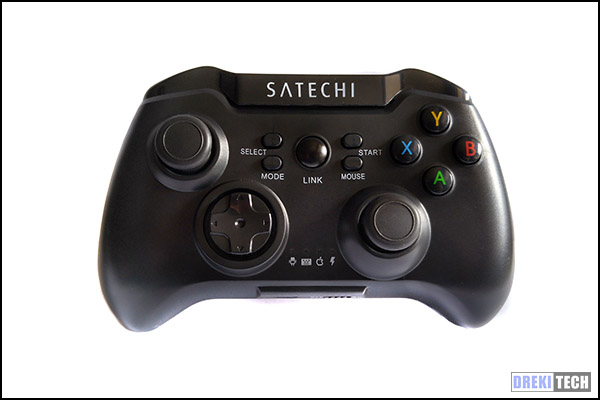 Author’s Note: A few weeks after writing this review, the device stopped charging and Satechi refused any warranty service. That is very disappointing and makes it significantly more difficult to recommend the device. Original review follows.

Conclusion:  The Satechi Bluetooth gamepad has a similar look and feel to an Xbox controller. The button action is springy and the response of the triggers is great. I tested the controller with some playstation emulators and it worked great. After mapping the keys in the application it was just like playing the game on a real console. The controller is comparable to my Xbox 360 controller in feel. I had no problems connecting it to Android and it pairs each time it turns on. I did not get to test it with iOS. Unfortunately all my attempts to pair the controller with Windows were thwarted by the computer thinking that the controller is a keyboard. Windows asks for a pin to by ‘typed’ but there is no way to type with a gamepad. Alternative methods of pairing were unsuccessful as well – the gamepad did not pair after entering default passcodes. This is a big disappointment as I was hoping to use this controller primarily with Steam on my desktop. The controller seems to only be able to connect by Bluetooth and it does not connect over USB. The battery life of the gamepad is pretty good. I’ve used it for a few hours and it still keeps on going. It can also be used while charging. Overall it’s a great gamepad for mobile gaming, but too bad it doesn’t like pairing with Windows.