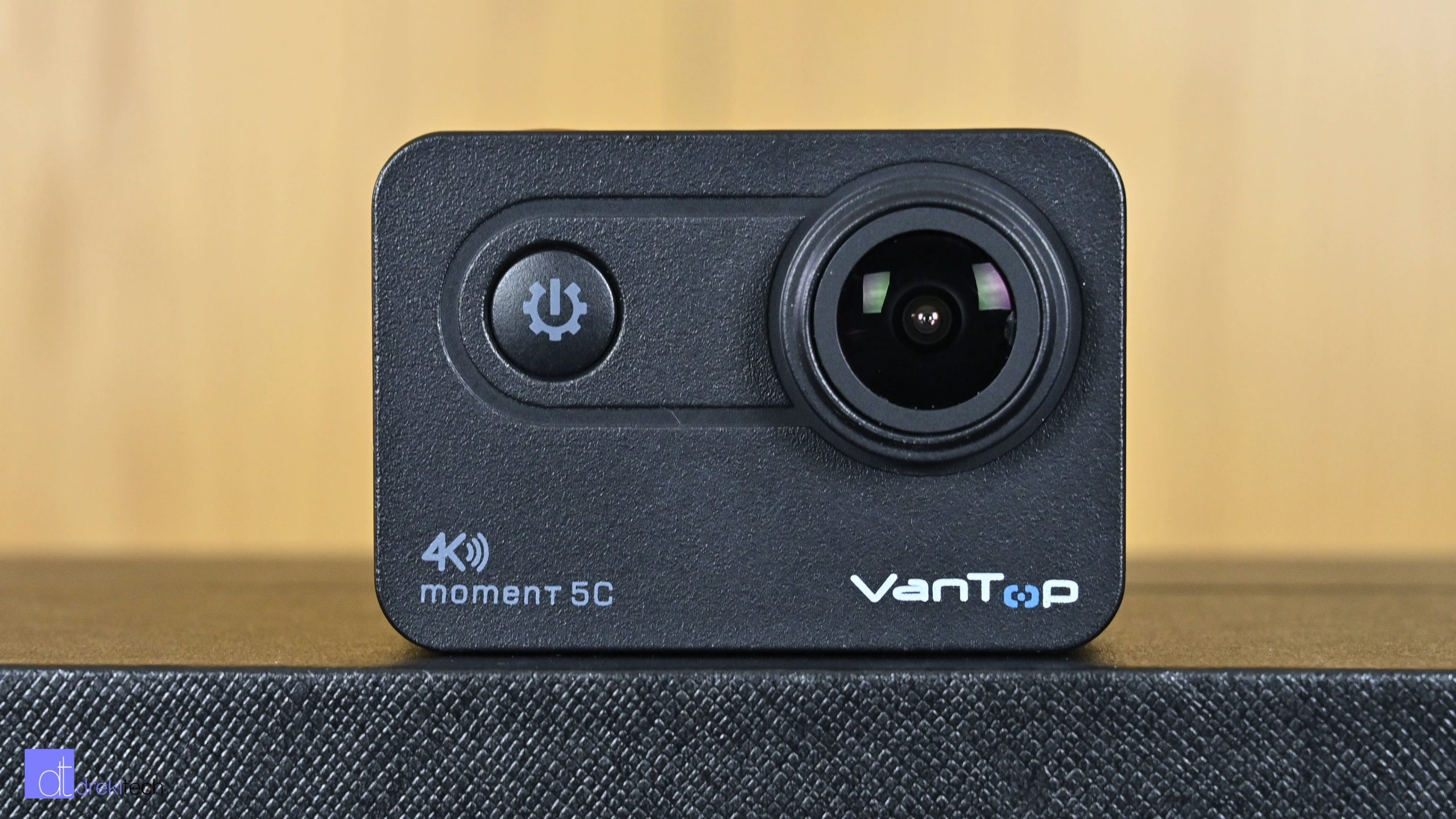 Editor’s Note: Thanks to Vantop for sending a sample of this camera for review.

The Vantop Moment 5C is a budget 4K action cam that claims to produce 4K 60 FPS video at under $100. While it is true that the camera can make a 4K video file with 60 FPS, this format is interpolated (upscaled) from a lower resolution. However this camera appears to do near-true 4K 30 with image stabilization and very decent 1080p 30 with EIS. As well, it produces colourful and vibrant video that most people will find pleasing, especially if they are not pixel peepers.

The build quality of the 5C is above standard at its pricepoint. The camera is made from a textured plastic that feels fairly light weight to hold, but it is solid with no major gaps in the construction. The battery door is hinged on as well. And the best part: there are still buttons! While several cameras have moved to a full touch screen UI, this one retains physical buttons which makes sense since the touch screen isn’t usable while the camera is in its waterproof case. Without that case the camera is not waterproof.

The UI of this camera is about as good as they get. Swipe left and right from the main screen to switch modes or use the gear icon to pull up the settings menu where it is broken down into video or photo settings and overall camera settings. The user interface is thoughtfully laid out and straightforward to navigate using either touch or buttons.

Two things to note: You can only scroll one page at a time with your finger. As well, there does not appear to be a quick settings launch button as there are on some other cameras. Press the front menu button a couple times to launch settings. The camera also cannot do lens distortion correction at the same time as image stabilization. Enabling one disables the other.

When it comes to using the camera in the field, the best formats this camera films are 1080p 30 and 4K 30. Most of the 60 FPS modes when combined with stabilization result in quality that is fairly blocky and lacks detail relative to the 30 FPS modes.

4K 60 is certainly upscaled from 1080p as on close inspection they look identical. For some reason there is an EIS setting that can be enabled at the same time as 4K 60 although the image quality looks exactly the same as 1080p 60, just with a larger file size. The results of 4K 60 is quite poor so there is virtually no point to use it.

For the best results stick to 4K30 which has a good amount of detail. Enabling electronic stabilization in 4K30 smooths out video shakes and bumps at the expense of a small amount of detail, bringing the 4K video a bit closer to 1080p30. Colours are stunning and vibrant, with deep blue skies, bright greens and beautiful flower colours. This camera really makes everything pop! And the results are video that, especially on a small screen, will look better than the vast majority of cameras. The loss of detail is not noticable unless pixel peeping.

The camera produces a finished file, in the sense that contrast is high, colours are bright and it is ready for sharing without editing. There are few settings other than exposure compensation and a flat colour mode but even that produces relatively bright and contrasty results. If you want a camera with lots of dynamic range to allow in depth post production editing (Protune) this will not be your choice.

This camera works best in want broad sunlight or a stable mount. So for example, cycling on the street or playing in the swimming pool in direct sunlight produced the best quality, whereas riding in the forest where it is always kind of dark made video that was slightly grainy, blurred and noisy. This is on par with most cameras at its price point. Using a 60 FPS mode in the dark forest does help video quality somewhat, as the camera locks itself to 1/60th of a second shutter speed, however the trade off in detail is pretty significant when using EIS.

1080p 60 mode is really the cameras weakness. Relative to other formats this camera shoots, the high frame rate modes when combined with electronic stabilization are blocky, chunky, high contrast and lack fine detail. Having the stabilization off makes better results.

As things start to get darker the camera still holds up reasonably well, until everything becomes too dark to see. In less than ideal light things get blurry fast. This is fairly common with cameras at this price point. The camera offers an Auto Low Light mode but it is only available in 60 FPS settings (Auto Low Light mode allows the camera to drop below 60 FPS and results in a brighter image at the expense of blur). So long as you are in bright indoor lighting the camera will do OK, mind you, noise and noise smoothing is fairly present. Use a 60 FPS mode without stabilization for best results in mixed lighting, or if it is too dark then use a 30 FPS mode without stabilization.

Audio quality on this camera is very good. It is rare that during testing we do not need to bring an external mic. With the 5C outside of its waterproof case things are easy to hear so long as the environment around you is not too loud. Occasionally if it is windy or there is loud traffic the camera will peak and clip loud sounds resulting in crackling distortion. Don’t talk too loud when you are close to the camera, as there is no setting for mic sensitivity so this cannot be adjusted.

This camera supposedly does 20MP photos from an image sensor that is only 12MP. The quality of the still photos is very good for an action cam, however using the 20MP mode is kind of a waste of memory card space as it is quite clearly an upscale. The closest mode to actual sensor resolution in the camera settings is 14MP so that’s the one I stuck with. And the results? Just like the video, they’re very pleasant with vibrant colours and a decent dynamic range. Just one thing, when the camera is pointed at the sun, get ready for some intense lens flares!

The 5C has middle of the road image stabilization quality. In 1080p 30 the camera holds solid to the center of the frame with few stabilization artifacts, so long as it is bright out. This is perfect for light duty applications such as handheld video, some chest mount footage, or with the camera mounted on the handlebar on the road, however it falls short of being able to stabilize handlebar footage on bumpy trails or anything seriously shaky. In general, only high end cameras such as GoPro can do this effectively so again this is another area where the 5C performs as expected. Keep in mind that in mixed or low lighting, electronic stabilization often interferes with image quality.

The cameras budget placement shows compared to more expensive cameras. True 4K 60 cameras like the Vantop Moment 6S or the SJCam SJ8 Pro produce significantly better 4K 60 as it is not upscaled. However, the colour produced with the Moment 5C is better than the 6S making video it produces more visually appealing on first glance. Since the 6S is higher grade hardware there is far more room for editing the video into something usable and all formats have very sharp detailed video, whereas the 5C is especially lacking at 1080p60.

When compared to cameras at its pricepoint, the Campark V30 or the Akaso V50 X share its weakness at 1080p60 format. Those two cameras have better stabilization but the audio quality on the Vantop 5C is significantly better. As for 4K video quality, while the V30 and V50 X have a bit more detail in 4K, if your final goal is watching it on a small screen like a smartphone, laptop or tablet the difference will be relatively minor.

True to the nature of budget cameras, the Vantop Moment 5C has its strengths and weaknesses. The good news is that it is a strong contender as far as cheap action cams go as the strengths do outweigh its weaknesses. It’s kind of funny that Vantop would advertise it as a 4K 60 camera with the same spec than their true 4K 60 cam, the Moment 6S, as a consumer may not know the difference and purchase this one for 4K 60 use despite it being upscaled. While most companies are fudging the numbers a little bit in this way, at least the results of this one are better than most available on the market. If the primary goal is to watch video on a smartphone, tablet, or put it on Youtube, this camera will suffice as it has vibrant colour reproduction, decent audio and a good build quality.